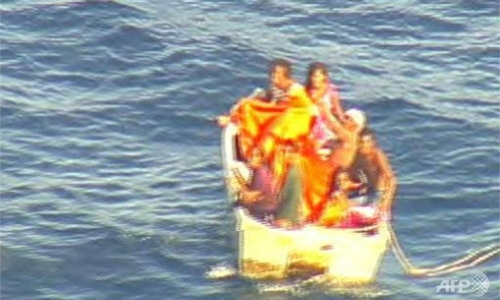 Crew members of an overloaded Kiribati ferry which sank in the Pacific claiming 95 lives were drunk, leaving passengers to die slow deaths from starvation and hypothermia, a damning report has found. The report gives the first official account of the loss of the ferry MV Butiraoi, which sank in January last year after setting off from Nonouti island bound for the capital Tarawa. It details a string of failures that led to the sinking and also gives a glimpse of the horrors endured by victims, who were missing in the vast ocean for eight days before the alarm was raised.

“Most, if not all, victims died from hunger, dehydration and hypothermia,” it found. “One died while giving birth in (these) most unhealthy and extreme conditions,” it said. The deaths of 84 passengers and 11 crew was the worst maritime disaster ever in Kiribati, a collection of 33 atolls and reefs scattered over an area the size of the continental United States. There were only seven survivors, who were found in a small aluminium boat after 10 days adrift.

The Kiribati government has previously provided few details about the circumstances of disaster, or even the number of fatalities, and initially refused to distribute the report widely. Ferries are a transport lifeline for its 110,000 population but the report found the Butiraoi, a 17.4 metre (57 foot) catamaran, should never have set out on its fateful voyage. One of its life-rafts was “non-functioning”, its distress beacon was missing or broken, it was not licenced to carry passengers and it had run aground twice before the voyage, damaging the vessel’s structural integrity.

In addition, the ferry set off in rough seas without the crew notifying maritime authorities of its departure. The report found widespread use of alcohol by the master and crew during working hours, “giving every drunken crew (member) the feeling of grandeur and power to make decisions alone”. “It was obvious the master of the MV Butiraoi was reckless and inconsiderate of the ship, crew and passengers,” it said.

The ship’s master did not survive. The report found the catamaran began to fall apart 30 minutes into the journey and had split and sank after two hours. It said there was no leadership from the crew, who had limited survival training.