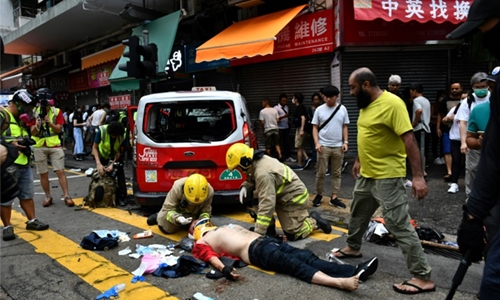 Hong Kong police and protesters clashed yesterday as tens of thousands marched through the central city wearing face masks in defiance of colonial-era emergency powers which threaten them with a year in prison for hiding their faces.Police fired tear gas and baton charged protesters in several locations, while some protesters threw bricks and petrol bombs at police, as night began to fall on Hong Kong.

After hours of marching in the rain on Hong Kong island and across the harbour in Kowloon, in what were largely peaceful rallies, police began to try and disperse the crowds. Police said protesters were participating in unlawful assemblies, blocking major roads, and ordered protesters to leave immediately. “Members of the public are advised to stay indoors and keep their windows shut,” the police said in a statement. Authorities had braced for two major protests yesterday, fearing a recurrence of Friday night’s violent protests which saw the Asian financial centre virtually shut down the next day.

Only hours after Hong Kong’s embattled leader Carrie Lam invoked emergency powers last used more than 50 years ago, mask-wearing protesters took to the streets on Friday, setting subway stations on fire, smashing mainland China banks and clashing with police. “The anti-mask law just fuels our anger and more will people come on to the street,” Lee, a university student wearing a blue mask, said on Sunday, as he marched on Hong Kong island. “We are not afraid of the new law, we will continue fighting. We will fight for righteousness.

I put on the mask to tell the government that I’m not afraid of tyranny.” Hong Kong’s four months of protests have plunged the Chinese-ruled city into its worst political crisis in decades and pose the biggest popular challenge to Chinese President Xi Jinping since he came to power six years ago. Protesters yesterday chanted “Hong Kongers, revolt” and “Fight for freedom, stand with Hong Kong ”, as riot police monitored them from overhead walkways and footbridges, some taking photographs and filming the marchers. Some roads clogged with protesters resembled a field of flowers, with thousands of colourful umbrellas.

Umbrellas are a symbol of an earlier pro-democracy movement, but were being used on Sunday simply to keep off the rain. Protesters handed out face masks to encourage people to defy the ban. One masked protester carried a mask-wearing “Buzz Lightyear” doll from Walt Disney Co’s “Toy Story” animation film. A branch of China Construction Bank (Asia) near Prince Edward station was vandalised yesterday with “No China” sprayed on it’s wall. Wan Chai station, closed with a neon sign saying serious vandalism, had a protester sheet draped over it which read: “this way to HELL”.

Protesters tore up pavements bricks to use as ammunition against police, who in return baton charged and pepper sprayed fleeing protesters. Friday night’s “extreme violence” justified the use of emergency laws, Beijing-backed Lam said on Saturday, but the laws have sparked further violent protests. The current “precarious situation”, which endangered public safety, left no timely solution but the anti-mask law, Matthew Cheung, Hong Kong’s chief secretary, wrote on his blog on Sunday. He urged people to oppose violence ahead of grassroots district council elections set for Nov. 24.