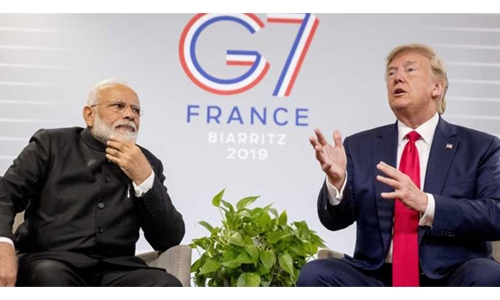 President Donald Trump will join Prime Minister Narendra Modi at a massive gathering of Indian-Americans in Houston, the White House said Sunday, in a symbolic show of the bond between the two leaders and countries. The September 22 rally -- dubbed, with a touch of Texan twang, “Howdy, Modi!” -- will mark a rare joint appearance between a US president and a foreign leader before an ethnic community, and be the pair’s third meeting this year.

Organizers say that more than 50,000 people have registered for the event, which will take place inside the NRG Stadium of the Houston Texans football team. The gathering is “a great opportunity to emphasize the strong ties between the people of the United States and India, to reaffirm the strategic partnership between the world’s oldest and largest democracies and to discuss ways to deepen their energy and trade relationship,” the White House said.

The White House said Trump would travel the same day to Ohio to showcase an Australian-owned factory alongside Prime Minister Scott Morrison, who will be on a state visit. The two joint appearances amount to a day-long attempt to nurture relationships with foreign leaders by Trump, whose brash style and outspoken remarks have frequently unnerved allies.

lanned a cultural performance and invited speakers including Steny Hoyer, the number-two Democrat in the House of Representatives. The joint event shows “the personal chemistry and friendship” between Trump and Modi, Harsh Vardhan Shringla, the Indian ambassador to the United States, told AFP.

“These are two leaders who are used to thinking outside of the box,” he said, describing the joint appearance as “unconventional and unique.” “The event will also reflect the strong bipartisan support there has been for US-India relations,” he said, describing Indian-Americans as an “organic bridge” between the world’s two largest democracies. Shringla said that Modi would also meet in Houston with energy companies before heading to New York for the UN General Assembly.

Some four million Americans trace their origins to India and the community is among the most educated and prosperous in the United States. The average Indian-American household earned some $100,000 in 2015, nearly double the US average, according to the Pew Research Center.