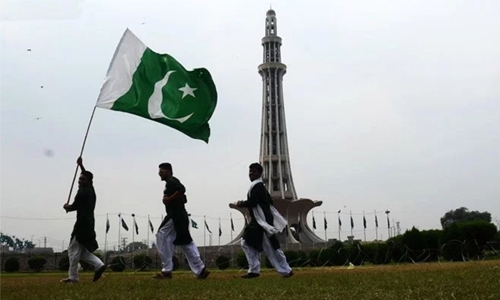 Pakistan is all set to celebrate its 73rd Independence Day today. It commemorates the day when the nation achieved independence and was declared a sovereign state following the end of the British Raj in 1947. The main Independence Day ceremony takes place in Islamabad, where the national flag is hoisted at the Presidential and Parliament buildings. It is followed by the national anthem and live televised speeches by leaders. Usual celebratory events and festivities for the day include flag-raising ceremonies, parades, cultural events, and the playing of patriotic songs.

A number of award ceremonies are often held on this day, and Pakistanis hoist the national flag atop their homes or display it prominently on their vehicles and attire. The day begins with special prayers for the integrity, solidarity, and development of Pakistan in mosques and religious places across the country. Citizens attending independence day parades and other events are usually dressed in Pakistan’s official colours, green and white. Many people meet their friends and relatives, dine over Pakistani food, and visit recreational spots to mark the holiday.

As the month of August begins, special stalls, fun fairs and shops are set up across the country for the sale of national flags, buntings, banners and posters, badges, pictures of national heroes, multimedia and other celebratory items. Vehicles, private buildings, homes, and streets are decorated with national flags, candles, oil lamps, pennants and buntings. Businesses engage in rigorous marketing, as do leading designer fashion outlets which stock independence-themed clothing, jewellery and self-adornments.

Public functions including elaborate firework shows, street parades, seminars, televised transmissions, music and poetry contests, children’s shows and art exhibitions are a common part of the celebrations. Along with flag hoisting, the national anthem is sung at various government places, schools, residences, and monuments on the day, and patriotic slogans such as Pakistan Zindabad are raised.

Musical concerts and dance performances are arranged both inside and outside the country, featuring popular artists. Homage is paid to the people who lost their lives during the migration and riots which followed independence in 1947, as well as martyrs of the Pakistan Army and recipients of Nishan-e-Haider, and political figures, famous artists and scientists. The Pakistani diaspora around the world organises cultural events to celebrate independence day; public parades are held in cities with large Pakistani populations, such as New York, and London.

A day to remember unmatched sacrifices