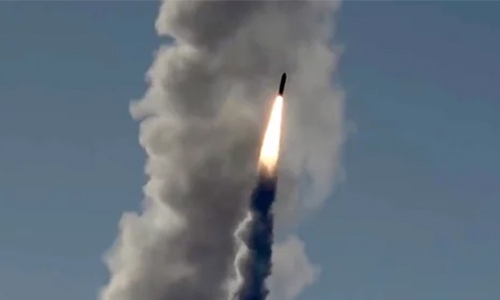 Russia’s nuclear agency chief yesterday confirmed that five scientists killed last week were developing “new weapons” and vowed to continue testing “until the end”, despite the explosion. The accident took place at an Arctic military facility on the coast of the White Sea on Thursday, but Russian authorities only admitted its nuclear nature on Saturday. The blast provoked a spike in radiation levels.

US experts have said it could be linked to the testing of the “Burevestnik” cruise missile, touted by President Vladimir Putin earlier this year.   National nuclear agency Rosatom on Monday honoured the memory of its five dead staff. “The best (thing) for their memory will be our further work on the new weapons,” the head of Rosatom Alexei Likhachev was quoted as saying by agencies.    “We are fulfilling the task of the motherland, its security will be reliably ensured,” he added.

Russia held a memorial service for the scientists in the closed city of Sarov in the Nizhny Novgorod region, 500 kilometres (300 miles) east of Moscow.   Rosatom has said the accident occurred while a missile was being tested on an offshore platform in the far northern Arkhangelsk region. Fuel exploded and the blast blew staff into the sea, it said. The nearby city of Severodvinsk recorded elevated radiation levels following the accident and panicked residents rushed to buy iodine to counteract radiation.