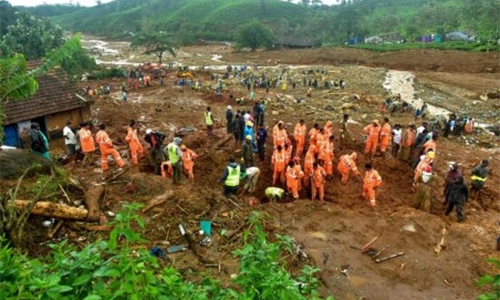 Indian authorities have moved around a million people into emergency camps in recent days as the death toll from monsoon floods jumped yesterday to at least 184. The southern state of Kerala has been the worst hit region for the second consecutive year, forcing the closure of the Kochi international airport for three days last week. “At least 76 people have died, 58 are missing and another 32 have received injuries,” Pramod Kumar, Kerala police spokesman, said.

Around 288,000 people across the state’s worst affected districts including Wayanad, Malappuram and Kozhikode have been moved to relief camps.  Thought the intensity of rain has reduced in the state, Kerala Chief Minister Pinarayi Vijayan said that weather updates show heavy rain could persist for two more days in the state. Authorities have been put on high alert.  The Indian Meteorological Department (IMD) has predicted “heavy rainfall” at isolated parts over Kerala from 12 to 16 August. Integrated Defence Staff is keeping a close watch and will review the situation in the state.

“Strong winds, speed reaching 45-55 kilometres per hour, are likely to prevail over the southwest, central and north Arabian Sea and along and off Kerala, Karnataka, Goa, Maharashtra, Gujarat coasts, Lakshadweep area, south Tamilnadu coast and Andaman and Nicobar Islands. Squally weather is likely to prevail over West Bengal and Odisha coasts. Fishermen are advised not to venture into these areas,” the IMD said in its bulletin.

Congress leader Rahul Gandhi, visited his Wayanad Lok Sabha constituency. In a Facebook post, the former Congress chief said, “My Parliamentary constituency Wayanad has been devastated by floods with thousands left homeless and shifted to relief camps.” At least 42 people have also lost their lives in neighbouring Karnataka state, which has seen some of its worst flooding of recent years. “We have evacuated over 580,000 people”, a senior Karnataka government official said. Many key highways and roads across the affected regions have been damaged or cut off by rising waters.

Local emergency personnel and troops from the army, navy and air force have been deployed for search, rescue and relief operations.  Indian media have also reported 66 deaths in the western states of Maharashtra and Gujarat, with tens of thousands of people shifted to relief camps.  While the monsoon rains are crucial to replenishing water supplies in drought-stricken India, they kill hundreds of people across the country every year. Last year Kerala was hit by its worst floods in almost a century with around 450 people killed.

Al Mashaaer Metro ‘transported over one million pilgrims in 45 hours’