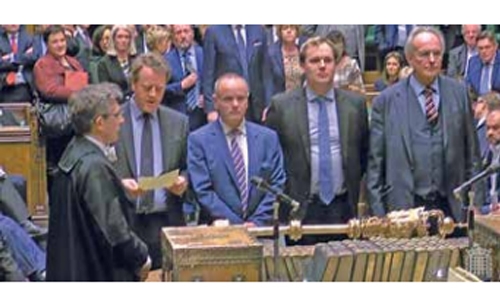 Britain’s parliament yesterday voted to ask the European Union to delay Brexit until at least June and head off a potentially calamitous end to their 46-year partnership in two weeks. MPs, however, also voted against a proposal to hold a second referendum during the delay, dealing a blow to the hopes of pro-EU campaigners. Britain is barrelling towards the March 29 Brexit deadline with no approved EU withdrawal agreement and a prime minister who appears to have lost control over her bickering cabinet.

Anxious businesses are pleading for action and US President Donald Trump waded in to pronounce himself “surprised to see how badly it has all gone”. MPs have twice rejected the deal struck by Prime Minister Theresa May’s with the other 27 EU nations -- in January and on Tuesday.

They voted on Wednesday not to leave without an agreement but without any firm roadmap on the way forward three years after Brexit was launched in a bitterly divisive referendum. The plan they all finally agreed on -- after turning down four other proposals -- was submitted by May herself: to ask EU leaders to postpone Brexit. The motion also included a proposal to hold a third vote early next week on May’s twice-rejected deal.

It passed by a 412-202 margin, providing some welcome respite to the prime minister. “All of us now have the opportunity and responsibility to work together to find a solution to the crisis facing this country, where the government has so dramatically failed to do so,” said Jeremy Corbyn, leader of the opposition Labour party. European Union leaders must now unanimously approve the delay. They will meet at a summit in Brussels on March 21-22.