32 killed, 128 injured in attack on protesters | THE DAILY TRIBUNE | KINGDOM OF BAHRAIN 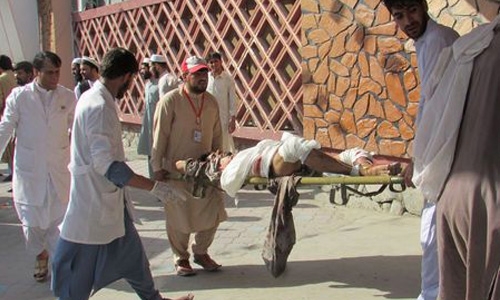 Jalalabad : A suicide attack on protesters in eastern Afghanistan yesterday killed at least 32 people, officials said, as an uptick in violence across the war-torn country dampens hopes for peace talks and elections. There were chaotic scenes at several hospitals as medical staff struggled to treat 128 people wounded by the powerful blast in Nangarhar province. Gul Majid was among scores of protesters blocking the highway between the provincial capital of Jalalabad and a major Pakistan border crossing when he “heard a big bomb”.

“Then I saw flesh, blood and people wounded all around me,” Majid told AFP outside one of the hospitals. “I am still looking for my friends. I don’t know whether they are alive or dead.” The men had been protesting over the appointment of a local police chief, provincial governor spokesman Ataullah Khogyani said. Provincial health director Najibullah Kamawal and Khogyani both confirmed the latest casualty toll. The attack came hours after a double bombing in front of a girls’ school in the provincial capital Jalalabad.