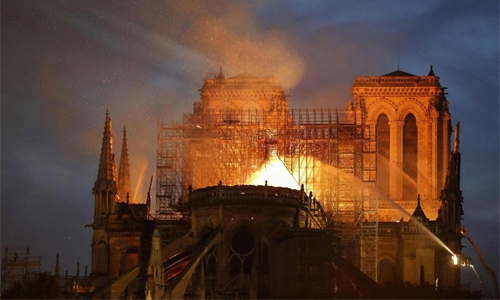 Rejuvenating cultural heritage in the wake of catastrophe

When one of the oldest and most famous structures of religious significance in Europe went up in flames last month, the world was watching, and many wept. Social media platforms were also ablaze with pictures and comments, with people racing to express an array of feelings: Shock, disbelief, sadness and grief mostly. Given my scholarly interest in religious music, and having written about Aleppo and its musical cultures, I received a number of messages from friends around the world.

The messages conveyed sorrow for the loss friends were experiencing as the Notre-Dame Cathedral in Paris was being engulfed by the horror of flames; but they also contained mentions of Syria. The dominant sense of loss was reminiscent of that expressed when well-known structures such as the beautiful streets of Old Aleppo were consumed by destruction and fire. While the smoke was still subsiding at Notre-Dame, news of donations from around the world came pouring in. The flood of funds to repair the fragile Gothic structure has been astounding, bringing together 1 billion euros ($1.1 billion) in the first two days, according to the New York Times.

The star-studded donor list featured contributions from the likes of the owner of Yves Saint Laurent and Gucci; though global luxury brands were not the only benefactors rushing to fill a restoration funding gap the city had been struggling to bridge. Capital is among many forms of input that continue to flow in support of the French cathedral. Along with emotions, much knowledge came about to satisfy the world’s curiosity about the significance of a treasured church that took more than 100 years to build in medieval Europe.

It might be possible to understand how cash moves faster than knowledge, but the volume and speed at which monetary benefaction was amassed has not gone down well with all observers. Some have objected to the implied neglect of human life in the rush to save buildings and art; others remarked on the apparent double standards philanthropy displays in relation to human catastrophe. What no one seems to deny, however, is that the astonishing flow of capital for the cathedral repairs has shed a new light on what wealth management can tell us about human behavior during crises.

What interests me here is how people think and behave in relation to what we call “cultural heritage,” particularly in the face of catastrophic events. This current, and first installment of a four-part column, touches on the immediately tangible sides of our shared cultural heritage —what scholars call “material culture.” In the remaining parts, I will touch on the types of heritage that take forms other than those of physical objects, what (for the lack of a better name) is called “intangible culture.” The focus in this series is on music, as I draw examples from the Notre-Dame Cathedral of Paris and the old city of Aleppo.

These two scenes of charred structures will probably continue to haunt people around the world for some time. One might say that, in some circles at least, people have shown shock in equal measures at the loss of the meandering commercial streets of Old Aleppo as they have the faltering roof of the Parisian cathedral. But hardly the same could be said about the rescue efforts — or attempts of cultural rescue — that were set in motion in these two places. The millions (even billions) pledged to repair the Parisian monument are likely to yield positive results.

Indeed, the fruits of a deeply meaningful restoration process will be enjoyed fairly soon, according to French President Emanuel Macron. The emotional head of state has promised the world that the beautified building will reopen by the time Paris hosts the Summer Olympics in 2024. In Aleppo, by contrast, not much is certain, let alone attractive. In the wake of devastating catastrophe, the only certain thing seems to be the high likelihood that uncertainty will persist. Most philanthropists would hesitate to put forward their funds, or their names, to repair a city that remains in the grip of such volatility as that engulfing Aleppo today.

While hesitation based on cerebral investment thinking is understandable, I wonder whether there may be other ways in which to weigh risks when it comes to fragile monuments in volatile settings. As an interested observer who has equally enjoyed visiting the floating cathedral on the river Seine as I have the souq in Old Aleppo, I find the global nature of reaction to the damage in both places noteworthy. The variety of backgrounds, countries, cultures, religions, interests, ages and politics of the people whose opinions I encountered has been striking.

I cannot help but think, if people love a particular place so much that they would move mountains (cash mountains in the case of Notre-Dame) to see it restored to its beautiful best, could they not draw on these emotions to move other kinds of mountains so that loved places elsewhere may return to life and again be as hospitable as they had been for hundreds of years? Perhaps this may be the case for Old Aleppo, which belongs to the world in many ways. That is my hope. After all, maintaining cherished cultural heritage has never been contingent on it neighboring mega-brands with mighty spending power.

A world without the wonders of nature can affect our happiness