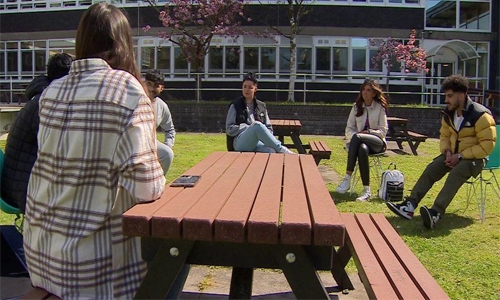 Students have been encouraged to start conversations about Ramadan with Muslim peers at Swansea’s Gower College. It is part of a project to raise understanding of one of the holiest Islamic months. “I never asked questions before - I felt it was none of my business,” said Paige, whose friend Tamin is a Muslim.

He said: “Whenever people ask me questions about what I’m doing it’s actually kind of heart-warming because they seem interested.” The festival involves a month of prayer and fasting - when people taking part will not eat or drink anything during daylight hours. Ramadan, which began in April, also involves communal worship and meals. This year, Eid-al-Fitr, the celebration to mark the end of the festival, begins on 12 May.

Tamin said since the project started, he has been approached by inquisitive friends asking to try fasting for themselves. “Ramadan is mostly just about helping everyone; the community, charities, yourselves, people near you,” he said.

“For me, it’s just basically getting myself more into Islam.” He said usually during Ramadan he would not think twice about fasting while at college or school, and he was grateful to be able to explain more to his classmates. Ceri Low, the learning support coordinator at Gower College, was one of several members of staff to try fasting as part of the project.

“It was only a short amount of time so I honestly don’t know whether I’d have been able to sustain it for the entire month of Ramadan,” he said. “I have a huge amount of respect for those that do.”

Mr Low said he had been “very impressed” with how many students had been keen to learn about Ramadan from Muslim classmates. “We make a big fuss [at the college] about Christmas and Easter, but we need to reflect the other faiths and communities,” he said.