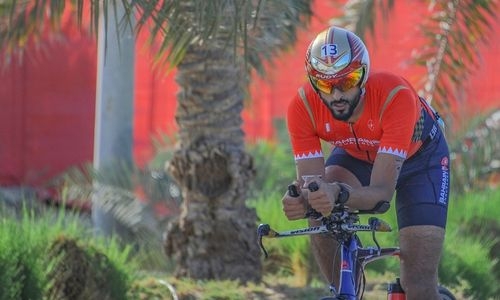 In line with the directives of His Highness Shaikh Nasser bin Hamad Al Khalifa, Representative of His Majesty the King for Humanitarian Works and Youth Affairs, the Organising Committee of the IRONMAN 70.3 Middle East Championship Bahrain has approved the threeday championship programme, which will take place in the Kingdom on 7-9 December 2022.

The Championship will feature a broad list of activities over the course of three days ahead of the main event which will be held on December 9, 2022.

Ahmed Al Hajj, Manager of the Championship, confirmed that the event’s organising committee has fully approved the programme, adding that the main race will showcase 1061 sportspeople from both genders representing different countries worldwide.

He further indicated that the growing number of participants contributes to achieving the main objectives set by the Organising Committee as per the directives of HH Shaikh Nasser bin Hamad Al Khalifa.

He pointed out that the IRONKIDS will witness a large participation of children in the running race that will be held before the main race, stating that the Organising Committee received a large number of applications to take part in it.

The event programme will be as follows:

• Wednesday, December 7, 2022: Opening of the supporting exhibition “Expo”, registration of participants in the races, the press conference of the championship, presentation on the main race, the official opening ceremony of the championship, and a brief on the age groups’ races.

• Thursday, December 8, 2022: swimming training, the Expo, the second day of registration, registration of bicycles, and the IRONKIDS.