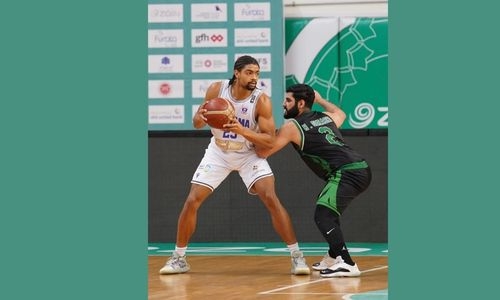 Xavier Gibson poured in a game-high 37 points including three pressure-packed free-throws in the final minute of overtime in Bahrain Club’s thrilling 88-84 upset of defending champions Manama last night which got the 10th week of action underway in the 2022/2023 Zain Bahrain Basketball League.

Manama made a furious comeback in the fourth quarter and forced the extra session with a Hasan Nowrooz basket that tied it at 77-all.

Things remained close in overtime, until Gibson made one of two charity shots with 54 seconds to play to break an 84- all deadlock that gave Bahrain Club a slim, one-point advantage.

After an unsuccessful Manama possession on the other end of the floor, the American professional then sank another pair from the line with 17 seconds remaining to make it 87-84.

Manama were unable to reply once again and then Ali Abbas split his charities with just a second to play to peg the final score and hand their rivals their first loss of the season.

Bahrain Club also improved to a 5-4 win-loss record with the result.

Hasan Gerashi was their last player in double figures with 11 points off the bench.

For Manama, Mohammed Ameer scored 19 points and took down 10 boards, while Elijah Robinson had 18 and 14 rebounds in the loss.

Nowrooz chipped in with 17 while Mustafa Hussain had 12. Bahrain Club were in front for much of the contest and surged ahead by as many as 12 points.

They held a comfortable 45-35 lead at the half but Manama made it 54-61 heading into the final canto, where they completed their comeback to force the additional five minutes of play.

Manama’s first defeat of the campaign meant that Al Ahli are the only team remaining who are unbeaten. In last night’s other game, Al Najma defeated Al Hala 98- 88.

Najma led by as many as 25 points and managed to stave off a Hala fightback in the second half.

Nick Ward scored 30 points for the winners, while Mohammed Buallay, Mohammed Hussain and Ali Jaber all finished with 18 markers apiece.

Najma improved to a 4-4 win-loss record.

For Hala, Tony Farmer had 36 while Ahmed Khalifa scored 17. They dropped to a 3-5 mark.

Then, tomorrow, Samaheej play Isa Town in the evening’s lone fixture at 6pm.