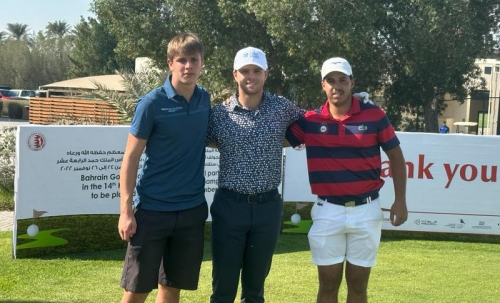 Three players took a share of the overnight lead yesterday after the first round of the 14th King Hamad Trophy golf championship, being played at The Royal Golf Club.

Amateur golfer Mehdi El Fakori from Morocco and British professionals Max Smith and Luke Joy each carded a six-under-par 66 over the opening 18 holes to rise to the top of the leaderboard in the prestigious three-day competition.

Ninety players have entered the event representing 20 countries, including hosts Bahrain, and the field boasts 40 professionals. El Fakori was the lone amateur in the top six. The highlight of his round was an eagle on hole three, while he also had six other birdies and a bogey on hole 12.

He shot a brilliant 32 on the front nine and then headed back to the clubhouse with a 34 to end his day. Smith and Joy also had seven birdies and a bogey apiece yesterday. Smith started off with a 34 total over the first nine holes before ending strong with a 32, while Joy carded a pair of 33s.

Joy is a two-time former champion and will be looking to secure his third King Hamad Trophy by the end of tomorrow’s play. Finishing one shot behind the joint-leaders were another trio of pros. Britons Ben David and Tom Sloman and Jordanian Shergo Al Kurdi all went five-under with 67 totals.

David and Al Kurdi each had five birdies on day one, while Sloman holed an eagle, four birdies and a bogey. A further shot behind with four-under-par 68 totals were the quartet of amateur Faisal Salhab from Saudi Arabia, Ayoub Id Omar from Morocco, Harry Goddard from Great Britain and Oliver Jacobson from Sweden.

They also completed the top 10, who were all just two shots from one another, making for a tightly contested leaderboard. Defending champion Ahmed Marjan from Morocco was among 11 players who were tied-17th with one-under-par 71 scores, while amateur Khalifa Daij al Kaabi was the highest-ranked Bahraini competitor in tied-28 on an even-par 72.

Play continues today with the second round. The first group is scheduled to tee off at 7am. At the end of today’s events, the field will be reduced to 45 players plus ties for tomorrow’s concluding 18 holes along The Royal Golf Club’s Montgomerie championship course. The tournament’s main sponsor is Batelco. Gold sponsors include Alba, Khaleeji Commercial Bank and Foulath. Silver sponsors are Bahrain Economic Development Board, BBK, Security Solutions and GPIC.