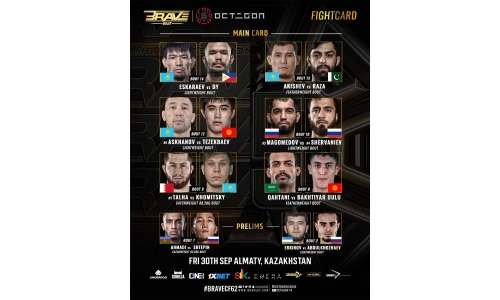 A battle between two the Lightweight division’s elite leads the BRAVE CF portion of the card, with, Kazakhstan’s Olzhas Eskaraev facing Filipino MMA legend Rolando Dy in a high-stakes 155-pound duel that has both contendership and reputation on the line.

Another huge Lightweight duel will oppose rising Russian standouts Kamil Magomedov and Akhmed Shervaniev, who are both ranked in the top 5 in the official BRAVE CF rankings and nearing a world title shot.

In the Featherweight division, surging contender Omar Solomanov will look for his third straight victory under the BRAVE CF banner in as many outings when he takes on hometown favorite Ilyar Askhanov, fresh off a huge win of his own, back at BRAVE CF 59.

Another humdinger to look forward to on the fight card is the only Middleweight fight of the night which sees one of the best amateurs ever, Bahrain’s two-time Light Heavyweight world champion, Murtaza Talha face off against Russian-born Kirill Khomitsky.

BRAVE CF continues to cement itself as truly the most-traveled and fastest-growing mixed martial arts promotion in the world with its third event in Kazakhstan, once again in association with partners Octagon League.

The Kazakh promotion will feature Octagon 35 simultaneously to BRAVE CF 62, as both organizations continue to work towards the development of the sport in Kazakhstan and Central Asia. For more information, visit www.bravecf.com