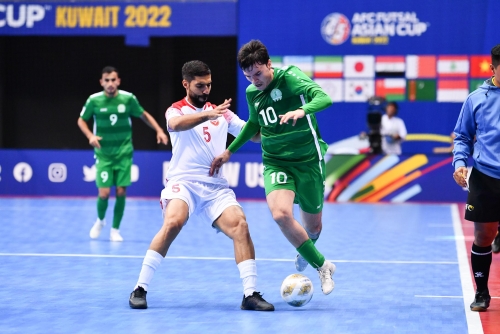 Bahrain lost some valuable points in a hard-earned 4-4 stalemate with Turkmenistan yesterday in the AFC Futsal Asian Cup 2022, currently being played in Kuwait City. The nationals trailed 2-3 at the half but then fought back after the break in a tense finish to forge the tie.

They thus came away with their first points of the competition after two matches. They had earlier lost to Tajikistan 3-4 in their opening game. Also yesterday, Uzbekistan beat Tajikistan 3-2 to take solo first place atop the group.

It was their second successive win. The Bahrainis are third on the Group B standings with one game left to play. It will be against the Uzbeks tomorrow. The nationals must win this contest and hope that Turkmenistan defeat Tajikistan in the day’s other fixture to have any chance of going through.

On target for Bahrain in their match yesterday were Ahmed Mohamed Jasim in the 10th minute, Mohamed Abdulla Ali in the 13th, Falah Abbas Isa in the 26th and Mohamed Radhi Alsandi in the 40th minute to salvage the draw.

The Bahrainis are one of 16 teams from across the continent taking part in the competition, which is being held for the 17th time. There are four groups in the opening stage. Each of the top two teams from all four groups move through to the quarter-finals following a single round-robin.