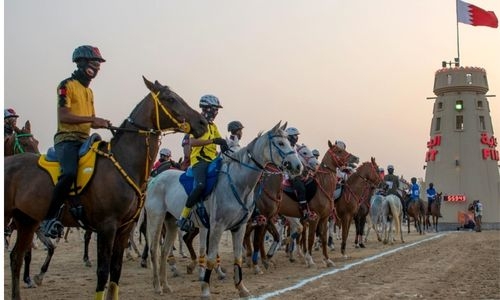 The 2022/2023 calendar of the national endurance horseracing season has been announced by the Bahrain Royal Equestrian and Endurance Federation (BREEF), with six major rides taking place between October and March of next year. The upcoming race programme has been approved by His Majesty the King’s humanitarian works and youth affairs representative, Supreme Council for Youth and Sports chairman and BREEF honorary president His Highness Shaikh Nasser bin Hamad Al Khalifa. The season kicks off with the first international and local qualifying rides on October 14 and 15. This features an international race of 100km and local events of 80km and 40km. A second qualifying event will then be held on November 4 and 5, which will include international races of 120km and 100km, and local qualifying events of 80km and 40km.

The National Day Endurance Championship will then take place on December 9 and 10, coinciding with the celebrations of the Kingdom’s National Day. Here will be a 160km international ride to go with 120km and 100km events, as well as 80km and 40km local qualifying races. The HH Shaikh Khalid bin Hamad Al Khalifa Championship will then take place on January 6 and 7 next year. It will feature an international 100km race, a 120km international event for local private stables, and qualifying races of 80km and 40km.

His Majesty the King’s Cup Festival will then be held from February 16 to 18. There will be a 120km race for private Gulf stables, an international 120km race for juniors and youth, and a 120km race for general riders. In addition, there will be international races of 160km and 100km. The HH Shaikh Nasser bin Hamad Al Khalifa Championship will then wrap up the season on March 17 and 18. It will include international rides of 160km and 100km, a local 120km event and local qualifying races of 80km and 40km. HH Shaikh Nasser affirmed that the new season is sure to be more competitive with outstanding levels shown by the riders.

Owner of Vietnam bar arrested after blaze that killed 32