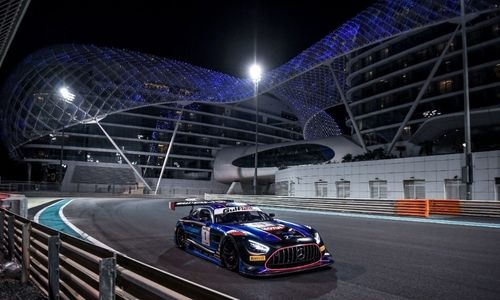 Bahraini-British motor racing team 2 Seas Motorsport have been confirmed as participants in the 12th edition of the Gulf 12 Hours, taking place later this year. The provisional entry list for the endurance event was announced yesterday by organisers. The race is scheduled to take place on December 11 at Yas Marina Circuit in Abu Dhabi. A record GT3 grid of 34 cars from the world’s leading manufacturers is set to take part. Organisers noted that a final entry list, which will also contain additional Porsche 911 GT3 Cup (992) entrants and more GT3 cars currently wait-listed, will be published at the end of the month. 2 Seas Motorsport are the race’s Bahrain representatives and were the winners of the race’s last edition, held earlier this year.

The team is set to field a twocar entry of their Mercedes AMG-GT3 Evo challengers. The Gulf 12 Hours will be the final round of the 2022 Intercontinental GT Challenge.

The curtain comes down on the season following events at Bathurst, Spa-Francorchamps and Indianapolis. The most successful team in Gulf 12 Hours history, Kessel Racing, is back with four Ferrari 488 GT3 cars, as part of an impressive total of 10 Ferraris on the provisional entry list. 2 Seas’ Mercedes cars are part of a nine-car field from the German marque. There are also four cars apiece from Audi, McLaren and Porsche, and one BMW. This brings variety and intense competition to a worldclass grid of top GT3 machinery. Aside from Bahrain, teams are competing with the flags of Germany, France, the UK, Italy, Australia, Switzerland, Hong Kong, New Zealand, Belgium and the UAE.

2 Seas’ victory in the previous Gulf 12 Hours in January made it back-to-back triumphs for the Bahraini outfit, co-owned by His Highness Shaikh Isa bin Abdulla bin Hamad Al Khalifa. 2 Seas had also won a special one-off edition held at Bahrain International Circuit in 2021.

HH Shaikh Isa was part of the 2 Seas crew that took the crown earlier this year, sharing duties behind the car with Martin Kodric and Ben Barnicoat. Their 2 Seas teammates Ian Loggie, Morgan Tillbrook and Casper Stevenson in the team’s other car finished on the GT3 Pro-Am podium in third place after coming home fourth overall.