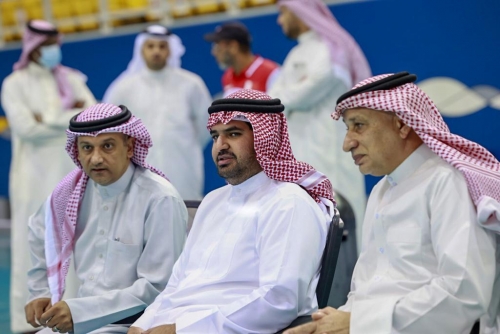 Bahrain is only days away from hosting one of the biggest competitions on the continental volleyball calendar. The 21st Asian Men’s U20 Volleyball Championship gets underway on Monday at the Bahrain Volleyball Association (BVA) arena at Isa Sports City in Riffa with 17 nations from across Asia taking part.

The Kingdom’s youth national team stepped up their preparations for the event and entered an internal training camp at a local hotel. The nationals also played a friendly game against their counterparts from Japan, with the home team losing to the visitors 0-3 (19-25, 16-25, 21-25).

HH Shaikh Isa met with head coach Saber Abdulwahed from Tunisia and the national team’s players. He encouraged them to give their best effort and wished them all the best for the competition. As part of the lead-up to the championship, the supreme organising committee held a meeting this week at the BVA headquarters, headed by Al Helwachi and attended by tournament director Habib Mohammed and the heads of the working committees.

They followed up on all matters related to the hosting of the event, which will be the third time it is being held in the Kingdom. Bahrain are in Pool A for the preliminary round alongside Hong Kong and Saudi Arabia.

Kazakhstan were also supposed to take part and were drawn in Pool D, but have withdrawn. The opening stage is scheduled to continue until August 24, after which a drawing of lots for Classification one to 12 (top two teams from each pool) will be conducted.

The teams which have already played each other in the preliminaries will not meet again in the one-to-12 classification, while the third-ranked teams of each pool will be relegated to contest the 13-to-18 classification.

The last edition of the competition was held in 2018, also held in Bahrain. Iran were crowned champions after beating South Korea in the final. Bahrain had an impressive campaign, finishing ninth overall amongst the 23 participating teams. The 2020 event was cancelled due to the global COVID-19 pandemic.