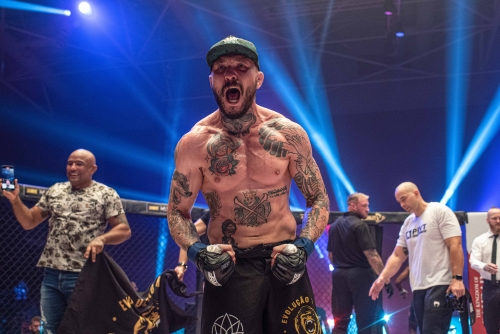 BRAVE Combat Federation is used to trending. With the all-encompassing action menu on offer, the promotion often draws millions of eyeballs from across the globe as martial arts fans get their dose of quality MMA.

But this past weekend at BRAVE CF 60 the promotion went viral via another source when world-renowned influencer, Iran Ferreira - more affectionately known by his social media fans and followers as Luva de Pedreiro - reposted a BRAVE CF video on his Instagram account.

In the video, Brazil’s Luiz Cado celebrates his Super Welterweight win over countryman Luis Felipe Dias by mimicking the Brazilian influencer. Cado acted out Luva’s famous trademark “Receba!” celebration which then caught the eye of Luva who then shared it with his 17.7 million Instagram followers via his story.

As of today, the organic BRAVE CF post has gained more than 1.5 million views in just over 24 hours on Instagram. Luva blew up over the last few years on social media and the soccer fanatic’s “Receba” moment entails him scoring goals before going into a frenzy of a celebration screaming “Receba” which is a Portuguese word that translates to “Receive” in English.

Following his technical knockout victory this past weekend in the Kingdom of Bahrain, Cado has unofficially become the baddest Brazilian Super Welterweight and looks to continue his dominance in the BRAVE CF cage.

This will mark the first-ever German event and we look forward to you joining us there! For more information visit www. bravecf.com.

At least 13 killed, 35 injured in fire at night club in Thailand