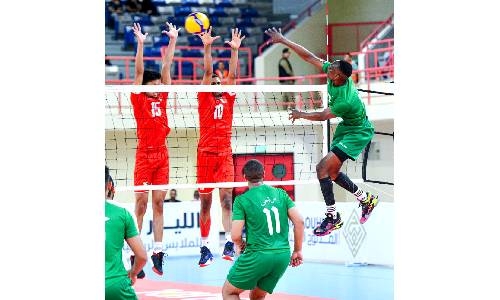 Bahrain came up short in their bid for the gold medals in the first West Asian Men’s U20 Volleyball Championship, which came to a close last night in Qatif, Saudi Arabia.

The nationals had to settle for the tournament’s silver medals following a heartbreaking 0-3 (25-27, 18-25, 22-25) loss to hosts Saudi in the final, played at Prince Nayef bin Abdulaziz Sports Hall. The Saudis used a decisive 10-2 rally to turn away a 15-20 deficit and end the match in three sets.

All top three teams were awarded their respective accolades in an awarding ceremony that followed the title contest. In yesterday’s other fixtures which determined the final rankings, Palestine clinched fifth place on the classification after sweeping Kuwait 3-0 (25- 13, 28-26, 25-19), while the UAE defeated Syria 3-2 (22-25, 25-18, 23-25, 25-12, 19-17) to claim seventh overall in the competition.

In Bahrain’s loss to Saudi, both teams matched each other point for point virtually throughout the opening set. After going down 24-25, the Bahrainis levelled the proceedings once more with a fine triple block at the net, but the home team responded and took the next two points to take the 1-0 match advantage.

The Saudis then dominated in the second set, going up 20-10. Bahrain tried to remain close but could not keep up.

Bahrain fought valiantly in the third set to try to extend the game. The nationals took a 12-11 lead and then made the most of a series of Saudi errors to go ahead 18-14.

It then appeared that Bahrain had found their momentum and would stay alive in the match after going ahead 20-15, but that set the stage for Saudi’s game-changing run. They scored the next six points to get back ahead 21-20, and then allowed Bahrain just two more points enroute to the title-clinching ball.

Following the West Asian champion, the Bahrainis are now set to look ahead to the 21st Asian Men’s U20 Volleyball Championship, which will be held in the Kingdom later this month. Bahrain are in Pool A for the 18-nation continental showcase alongside Hong Kong and Saudi Arabia.

Pool B features Iran, Japan and India; Pool C includes South Korea, Qatar and Kuwait; Pool D consists of Thailand, Kazakhstan and the UAE; Pool E features Iraq, Australia and Bangladesh and Pool F comprises China, Taipei and Pakistan. This year’s Asian under-20 event will be the third time Bahrain is hosting. The Kingdom previously also staged the tournament in 2014 and 2018.