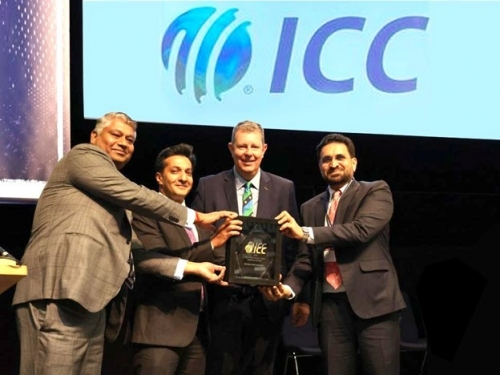 Bahrain Cricket Federation’s initiatives to empower women through sports received global recognition at the ICC’s annual Conference by picking up the award for the Female Cricket Initiative for 2021.

The award was received by BCF President Hatim Dadabai along with Mohammad Mansoor, Chairman- Advisory Board and Gurumurthy Palani, the Chief Development Officer in the UK.

This award comes as a result of the BCF’s efforts to build a robust community of women cricketers, to establish a pipeline of youngsters to build the sport from grassroots in schools and clubs, and prepare a strong national women team for Bahrain - a project which resulted in Bahrain breaking several world records in their first tour abroad.

“This has been an exceptional year for cricket in Bahrain, we’ve seen our initiatives bring results - from not having a team at the beginning of this year, to breaking world records and now global recognition from ICC’’, added Mohamad Mansoor, Chairman, BCF Advisory Board.

“Now we need to concentrate on building the infrastructure, getting the facilities in place before we can move to the next level and for this we would need the continued support of HH Shaikh Khalid bin Hamad Al Khalifa. I’d also like to thank Mohammad Shahid who has been a great source of strength for us.”

Speaking about the future plans, Gurumurthy Palani, Chief Development Officer, BCF, said, “We want to introduce women’s cricket quite strongly in the schools and want more girls to start playing cricket. We want to entice more Bahraini girls to come into cricket so that we have a strong pool of talent.”

Alok Gupta, CEO, YK Almoayyed & Sons, was delighted with this latest laurel,” As one of the earliest sponsors of the Bahrain women’s cricket team, we at Nissan, have always believed in the potential of the women cricketers in Bahrain. We knew they would make us proud with their hard work and dedication. We wish them more success in the time to come.