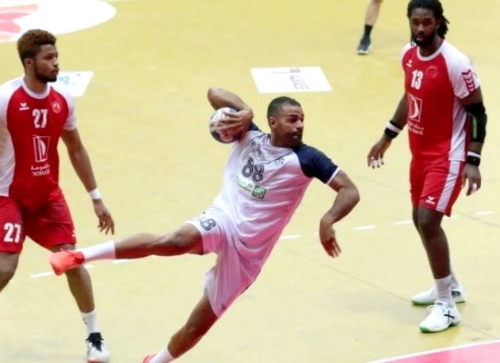 Bahrain’s Al Najma last night powered into the gold medal game of the 24th Asian Men’s Club League Handball Championship, being held in Hyderabad, India. The national and Gulf champions punched their tickets to the final following a hardearned 22-21 victory over Al Arabi Club of Qatar.

They will next take on Al Kuwait of Kuwait in the title-decider. Kuwait marched through after beating their countrymen from Al Qadsia 25-20 in yesterday’s other semi-final. Arabi and Qadsia will face off for the bronze medals.

The gold and bronze medal matches are scheduled to take place tonight, with Najma’s contest scheduled for a 3.30pm start, Bahrain time. Ali Eid was once again the star man for Najma, finishing yesterday’s game as their leading scorer with eight goals. Mahdi Saad added four for the Bahrainis and Hasan Al Fardan had three, while Komail Mahfoodh and Oliver Nyokas each scored two.

The Najma score sheet was rounded off by Kevynn Alix Nyokas, Ahmed Fadhul and Mohammed Habib Naser who fired in a goal apiece. Goalkeeper Mohammed Abdulhussain also played a key role for the team, finishing with 12 saves.

Najma needed to fight back from a single-goal deficit, 17-18, with just under six minutes to play. Eid scored the goal that tied the proceedings and it was the first of five unanswered that gave the Bahrainis the lead for good.

Mahfoodh and Al Fardan alternated their next four goals to put Najma ahead 22-18 with less than four minutes remaining. Scare Najma appeared to be cruising at this point, but Arabi gave them one last scare, cutting their lead to just one goal with still a minute on the clock.

The Qataris had one last possession just moments before the final buzzer to tie the game, but they turned the ball over with a bad pass, sealing the victory for Najma. Najma’s clash with Kuwait in the final is a rematch of their earlier meeting during the preliminary round, which the Bahrainis won 30-29.

Najma will be hoping to secure their second title in the history of the competition. They won it once in the past, in the 2017 edition which was also held in Hyderabad. They will also be hoping to secure a berth in this year’s International Handball Federation (IHF) Men’s Super Globe, which takes place in October in Saudi Arabia.

Only the champions will book a ticket to the event, which is contested between champion clubs from continental confederations. Najma had also claimed the silver medals in 2015 and the bronze in 2001. In the previous edition of the tournament held last year, Najma placed fourth after losing in the bronze medal game to Arabi by a single goal.