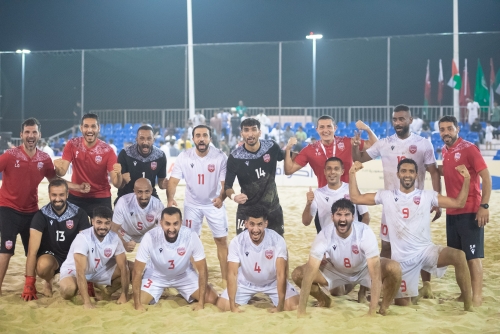 They defeated Saudi Arabia 3-1 last night, earning them a full three points and securing their place in the tournament’s semi-finals. Scoring for the nationals in yesterday’s contest were Mohammed Ashoor, Mohammed Darwish and Rashid Jamal.

They spearheaded the Bahrainis to a full six points in Group B at the end of the competition’s preliminary stage, and now head into the final four as one of the favourites to make it through to the gold medal match.

The nationals are set to take on the UAE in the semi-finals. That game will be played tomorrow. The nationals are coached by Sadeq Marhoon. Group A comprises four teams, including Kuwait, the UAE, Lebanon and Oman.

The Bahrainis conducted an external training camp in Oman over the past few weeks in preparation for the competition. The team’s delegation in Jizan is headed by team manager Bader Shamsan, and it features a list of 13 players.