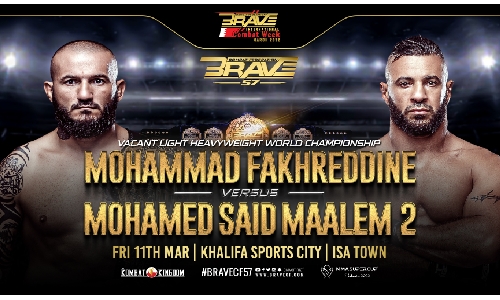 Mohammad “The Latest” Fakhreddine of Lebanon and Mohamed “ L’Ambiance” Said Maalem of Algeria will meet again for the vacant BRAVE CF Light Heavyweight World Championship at BRAVE CF 57 on March 11.

Both fighters were scheduled to fight on April 1st at BRAVE CF 50, however, Fakhreddine withdrew due to illness a few minutes before the fight.

They faced each other for the first time at BRAVE CF 52: Bad Blood in August 2021 but the matchup came to an unsatisfactory end when the Italian Federation of Grappling and Mixed Martial Arts decided to overturn the outcome of the bout following a thorough investigation.

It was found that there were illegal strikes made by Said Maalem on Fakhreddine in the final sequence, something that contributed to the stoppage of the match.

Now, the two will have to run it back with a chance to have a much more definitive ending and crown the new BRAVE CF Light Heavyweight World Champion.

BRAVE CF 57 is scheduled to happen at the Khalifa Sports City Arena in Isa Town, Bahrain, as part of the BRAVE International Combat Week.