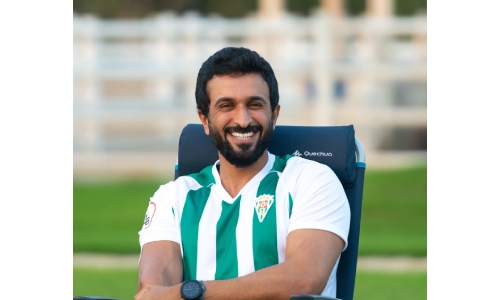 His Highness Shaikh Nasser bin Hamad Al Khalifa, Representative of His Majesty the King for Humanitarian Works and Youth Affairs, asserted the importance of the training camp carried out by the Spanish team Cordoba CF in Bahrain, adding that it was influential in promoting the Kingdom’s remarkable achievements in various sectors, including the sports field.

In addition, His Highness indicated that the gains of this visit will raise the technical and experience levels of the players of the national clubs, which will significantly benefit the Bahraini national team.

On the occasion of the end of the Spanish team’s training camp, HH Shaikh Nasser bin Hamad Al Khalifa stated “The visit came to promote Bahrain and its brilliant successes during the prosperous era of His Majesty King Hamad bin Isa Al Khalifa, the King of Bahrain.

Cordoba’s training camp highlights the renaissance of Bahraini sports and Bahrain’s high capabilities that have placed it at the forefront of the host countries for various sports tournaments and teams.”

“The visit of the Spanish team comes in line with Bahrain Economic Vision 2030, which is keen on promoting Bahrain through sports as an ideal way to convey the messages of Bahrain in various fields.

And it confirms Bahrain’s position as the capital of youth and sports that make it shine in the global spotlight,” HH Shaikh Nasser bin Hamad continued.

His Highness noted that the presence of the Spanish team in Bahrain will have positive repercussions on Bahraini football.

“The friendly games that brought Cordoba CF together with Al Khaldiya Sports Club and Riffa Sports Club provided the teams with a broad space to gain expertise and technical skills, which was achieved thanks to the interactions with the skilled players of Cordoba CF.

The benefits of these games will be reflected in the performance of the two teams and the national team, which includes an elite group of players from Al Khaldiya and Riffa.”

HH Shaikh Nasser said, “Cordoba’s training camp has opened wide areas of cooperation with the Bahraini clubs and the Bahrain Football Association, which we hope will culminate in the development of Bahraini football and serve us in discovering more sports talents.

This is because the Spanish team possesses high levels of technical experience and skills in management and the discovery of talents in football.”

Cordoba CF played two friendly matches in Bahrain, winning the first match against Al Khaldiya by 3-1 goals and drawing 1-1 in the second one with Riffa.

The two matches were held at the Bahrain National Stadium.

The Spanish team left Bahrain after the conclusion of its training camp, which witnessed various activities and numerous visits to tourist and heritage sites in Bahrain.