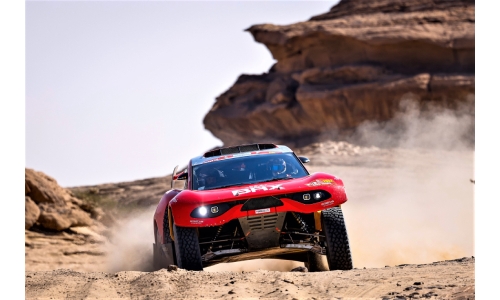 Sebastien Loeb’s pursuit of a first Dakar victory will continue for at least another day as Bahrain Raid Xtreme close in on another piece of rally history in Saudi Arabia.

While it will require a major drama on one of the two remaining stages to block a fourth Dakar win for Al Attiyah, Loeb will take the fight to the end, with BRX team-mate Orlando Terranova tracking him home in the fourth position.

Stéphane Peterhansel won the Wadi Ad Dawasir to Bisha stage from Carlos Sainz, as Terranova and Dani Oliveras finished third in their Prodrive Hunter and Loeb clocked the fifth-best time, 1 min 25 secs ahead of Al Attiyah in seventh.

Two-dimes Dakar winner Nani Roma and Alex Haro, whose challenge was almost ended by first week problems in the Saudi desert, also kept the third Prodrive Hunter on course for a finish in Jeddah tomorrow.

It means BRX is on the verge of becoming the first top Dakar team to complete the toughest motorsport endurance event in the world with a full complement of cars running on next-generation advanced sustainable fuel.

“It was a good day out there,” said Loeb.

“The first part of the stage was really fast and then the second part was much more interesting with tracks and real driving so I could make quite a difference at the end of the stage.

“Tomorrow is the last big chance to take time but as I’ve been saying from the beginning, we will see where we are on Friday in Jeddah.

We cannot try more than what we are doing now as we are pushing to the maximum on all the sections.”

Terranova said: “Today was a really good day for us as I said we will push and we did because nothing is over yet.

There are still two more days and we need to be on the pace ready for the finish.

Roma completed the stage to say: “It was a stage with so many different surfaces today but the thing that was hardest was the sun in my eyes at the start of the stage.

That was tricky because climbing dunes you have to angle your car over to one side to not look at the sun directly, but that’s all part of the adventure of rally raid.”