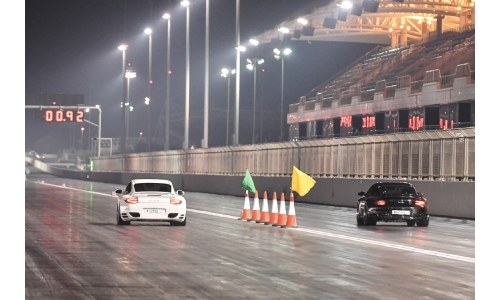 Bahrain International Circuit (BIC), “The Home of Motorsport in the Middle East,” brings the action back to its world-class quarter-mile strip tonight with the Kanoo Motors Rolling Drag Nights.

Similar to BIC’s Ebrahim K Kanoo Drag and Drift Nights, Rolling Drag offers participants the chance to power their very own cars or motorbikes down the BIC drag strip, which is a member of the US-based National Hot Rod Association (NHRA) Worldwide Network.

The major difference in Rolling Drag is that those who take part do not start from a standstill, but a rolling speed of 80kph.

Rolling Drag is therefore the perfect activity to invite a friend or more for a challenging series of head-to-head battles within a safe and controlled environment.

The cost to participate is BD22 for each driver or rider.

There is an additional fee of BD11 for a service car and BD9 for a crew member.

An accompanying passenger can join in on the action at a fee of BD8.

Spectators can watch from the sidelines for a nominal entry fee of BD2.

Just as in every BIC activity, safety standards of the highest level are followed at all times during the evening’s events for both drivers and spectators alike.

Moreover, attendees should note that the green shield, as shown on the BeAware App, must be presented on entry.

Children under 12 are permitted entry when accompanied by a qualifying adult.

For more information on the Kanoo Motors Rolling Drag Nights, visit the circuit’s official website on www.bahraingp. com or call the BIC Hotline on +973-17-450000.