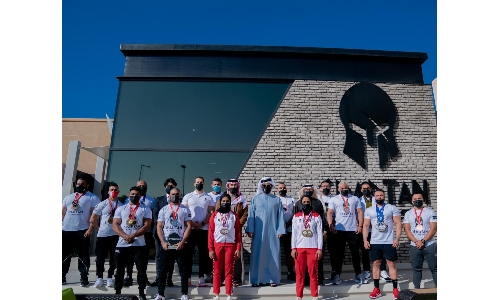 This was part of HH Shaikh Khalid’s visits to sports clubs and centres, which have succeeded in presenting sports heroes who have through their achievements raised the name of the Kingdom in their various participations.

During the visit, HH Shaikh Khalid met with the owner of Spartan Fitness Faris Mustafa Al Kooheji, and a number of the centre’s members and athletes.

HH Shaikh Khalid praised the efforts of the centre for its service to Bahraini sports, through programmes and events that continue to contribute to motivating individuals.

He also praised the effort of centre for its efforts in raising awareness of the importance of sports within the community.

HH Shaikh Khalid was briefed on the various programmes offered by Spartan and its plans to further increase their efforts and continue contributing to the development of sports and the level of athletes.

He said the visit reflects HH Shaikh Khalid’s appreciation for all sports establishments, and highlighted his commitment to strengthening communication to advance the sports sector.