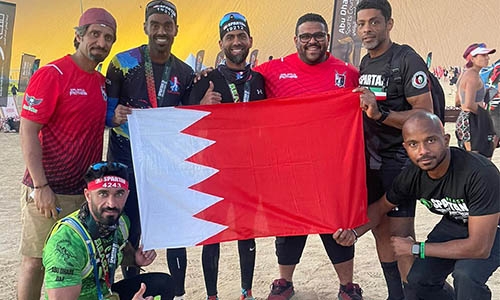 In a unique achievement and despite all the challenges, Team Bahrain OCR achieved outstanding levels in their participation in the Spartan World Obstacle Race Championship, which was held in Abu Dhabi from 2 to 5 December, which witnessed wide participation from over twenty countries of the world.

Bahrain athletes were able to turn attention to them after the high levels they presented despite the competitions, but the levels were very advanced and developed.

The Bahraini participation witnessed the brilliance of the OCR athlete Nawaf Yousef in the age group competitions, as he ranked ninth in the general ranking out of fifty participants in the category.

Seema Al-Kharraz, General Secretary of the Bahrain OCR Club, confirmed that this participation has strengthened the Bahraini presence in the world championships, especially after the game was approved by the Global Association of International Sports Federations (GAISF), noting that the tournament increased the players’ experiences, and it will be a major factor for the upcoming events.

He explained the high levels that the players showed in the championship confirm the great development of the obstacle course races in the Kingdom of Bahrain, thanks to the vision of His Highness Shaikh Khalid bin Hamad Al Khalifa, First Deputy Chairman of the Supreme Council for Youth and Sports, President of the General Sports Authority and President of Bahrain Olympic Committee, and the efforts of the Bahrain Olympic Committee.

On this occasion, Shaikh Khalid bin Ibrahim Al Khalifa, President of the Bahrain Club for Obstacle Race, said: “We dedicate this achievement to His Highness Shaikh Khalid bin Hamad Al Khalifa, First Deputy Chairman of the Supreme Council for Youth and Sports, President of the General Sports Authority and President of Bahrain Olympic Committee, for his continuous support of the Bahrain OCR and his continuous guidance, which motivated us to do more.

I would like to thank all the players who proved their worth despite the challenges they faced and were able to raise Bahrain’s name high in the tournament.

I also thank the members of the club’s board of directors and the administrative and training team who made great efforts during the past months to prepare the Bahrain team.”

Shaikh Khalid added: “This participation will enhance the status of this game in the Kingdom of Bahrain and contribute to attracting many Bahraini talents in this field.

We will seek, through the club to develop this game by preparing local competitions and creating the infrastructure for this popular global sport.”