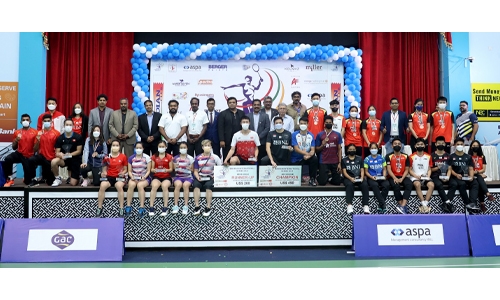 The Indonesian pair of Aisya Fatetani and Bobby Setiabudi clinched their respective singles titles in the Bahrain International Series (BIS) Badminton Tournament 2021, which came to a close at the Indian Club.

There might have been 25 countries represented at the start of BIS2021, but come to the finals, there were only two countries still standing – Indonesia and Hong Kong.

The two countries split the titles between them, with three going to Indonesia and two to Hong Kong. There was a lively crowd at the venue to watch the competition’s finals day, which rounded off a great week of international badminton. The two Singles’ finals were highly competitive, both going down to the wire in thrilling three-set matches.

The first trophy of the day, the Mixed Doubles, was always going to be a Hong Kong win as the final was played out by two Hong Kong pairings. Lee Chun Hei Reginald and Ng Tsz Yau took the honours in straight sets – losing a very tight first set seemed to break the spirit of opponents Law Cheuk Him and Yeung Nga Ting, who couldn’t really get a challenge going in the second set. The other doubles titles were split.

The Women’s crown went to the Hong Kong pairing of Yeung Nga Ting and Yeung Pui Lam, while the Men’s to Indonesia’s Amri Syahnawi and Christopher David Widjaya.

The BIS 2021 prize presentation ceremony followed the completion of the Men’s Doubles final with prize money and attractive trophies being distributed to the various winners and runners-up. Medals were also handed out to the losing semi-finalists and mementos presented to the event’s sponsors and various tournament officials and organisers.