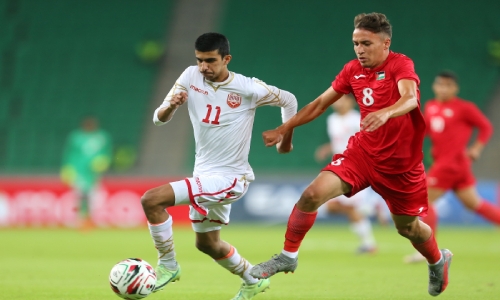 Mubarak Mohammed and substitute Abdulla Al Subaie were on target for the Bahrainis on either side of half-time. Al Subaie supplied the winner six minutes from the end of regulation.

The tournament is being held in the Iraqi city of Basra, and yesterday was the opening evening of play. The competition, organised by the WAFF, continues until December 1.

Bahrain are in Group A for the tournament’s preliminary round, where they will also face hosts Iraq, Kuwait and Yemen. Group B features Lebanon, Syria, the UAE and Jordan. Bahrain head coach Adel Al Nuaimi fielded a starting 11 that included Khaled Khalil as the goalkeeper, Mahmood Al Bannai, Sayed Mahmood Almosawi, Ahmed Diaa, Abdulla Al Khalasi, Hashem Luay, Saad Abdulla, Salem Al Dosari, Sayed Jassim Majid, Abdulrahman Hameed and Mohammed. The nationals were able to take the lead in the 18th minute when an Al Dosari shot on goal came off the Palestine keeper.

Mohammed was able to get to the rebound first, which he sent home to make it 1-0. The Palestinians were able to equalise in the second minute of first-half stoppage time through Qais Taha, which was enough to send the contest deadlocked into the break.

The Bahrainis pressed hard for the winner in the final 45 minutes, and their efforts were finally rewarded in the 84th minute with Al Subaie’s winner. The Bahrainis took the full three points and went directly to the top of their group. Yesterday’s other fixture between Iraq and Kuwait finished late at night.

Bahrain will be back in action tomorrow when they face off with the Iraqis. Their third game will then be against Kuwait on Wednesday, before playing their final group match on November 28 against Yemen.

The top teams from both groups will qualify for the final. The nationals are in Basra with a delegation headed by Bahrain Football Association board member Ayman Al Fardan.