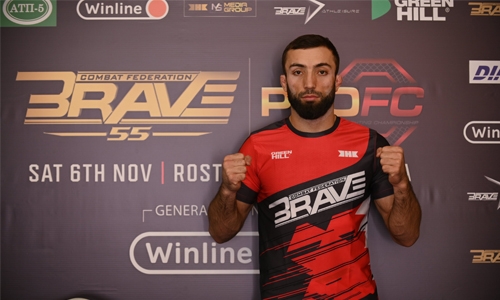 There are some seriously big hitters and lethal submission artists lined up for the much-awaited BRAVE CF 55 card on Saturday, November 6, but one scheduled encounter could almost guarantee that it will need the help of the judges to decide the outcome.

At the aforementioned extravaganza set to take place in Rostov-on-Don, Russia, hometown hero Kamal Magomedov is slated to take on Brazil’s Luis Felipe Diaz in a battle between two promotional newcomers.

Magomedov, a super welterweight who owns a spotless 8-0 record in the sport has not gone the distance in his professional career yet as he has five submission victories and three via knockout under his belt.

Meanwhile, Dias stands with a 93-per cent finishing rate to go along with his impressive 14-3 record. The Brazilian scored his lone decision win two years ago after bouncing between knockout and submission victories since he turned pro in 2017.

With both men’s menacing reputation of finishing the match before the final bell, it seems that three deciding officials at cageside on fight night will have one less bout to worry about.

In addition, the two standouts could be more evenly matched than expected on paper. Moreover, an enthralling win by either man at BRAVE CF 55 could pave the way to a potential shot at the vacant BRAVE CF Super Welterweight Championship.

BRAVE CF 55 will be broadcast live and free on BRAVE CF TV (bravecftv.com) this Saturday, November 6th at 9:00 AM (EST).