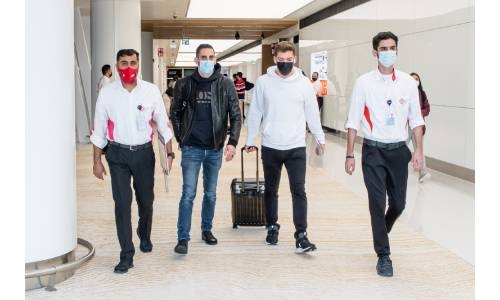 The Kingdom of Bahrain and Bahrain International Circuit (BIC) have begun welcoming the drivers, teams and officials of the FIA World Endurance Championship ahead of this weekend’s Bapco 6 Hours of Bahrain.

The event’s participants are coming from all across the globe for the first-ever WEC double-header to be held at “The Home of Motorsport in the Middle East” in Sakhir.

The Bapco 6 Hours of Bahrain is the fifth and penultimate round of the 2021 WEC season.

It will be the first of back-toback WEC races in the Kingdom to end this championship campaign.

It will be followed on the weekend of November 5 and 6 by the season-finale, the Bapco 8 Hours of Bahrain.

The Kingdom’s guests were assisted upon their arrival at Bahrain International Airport by members of BIC’s Meet and Greet Team.

Many of them went straight to work at BIC to begin their final preparations for this weekend’s racing, which kicks off Thursday night with Free Practice 1 to be held behind closed doors.

Friday and Saturday will be open to the public, with two more Practices taking place followed by Qualifying on Friday.

That will set the stage for the gruelling six-hour race on Saturday, flagging off at 11am and ending at 5pm.

All the racing will take place along BIC’s 5.4112-kilometre Grand Prix circuit.

Prior to the Sakhir spectacle, the WEC held events across some of Europe’s top tracks, with the 6 Hours of Spa-Francorchamps in Belgium in May, the 8 Hours of Portimao in Portugal in June, the 6 Hours of Monza in Italy in July and the world-famous 24 Hours of Le Mans in France in August.

Bahrain continues to be the only Middle Eastern destination of the WEC, and this year the series’ only stop in all of Asia.

The WEC’s newest champions are set to be crowned at BIC at the end of the final round, ensuring that there will be plenty of exciting action as the title battles culminate in these final two weekends.

Off the race track, there will be plenty of entertainment for the whole family, including international dance shows, music acts, roaming performers and a kids’ zone.

Tickets are now available for Friday and Saturday at just BD5 for adults (BD8 for both WEC events) and BD2.5 for children aged 3 to 12 years old (BD4 for both events).

Kids under three are free, whilst there are also further discounts available for students, those with special needs and senior citizens.

Hospitality packages are also on offer for race day on both weekends.

Ticket prices offer one of the most affordable ways to witness a World Championship motorsport event.

Full details are available at bahraingp.com. Spectator entry policy for the races will be in line with the Kingdom of Bahrain’s prevailing COVID-19 traffic light system.

Under the current green conditions, entry is permitted to all.

However, should the traffic light status change, entry restrictions will be in place in line with Government direction.

For full eligibility criteria for those wishing to buy tickets to enjoy the races, or for other information on the highly anticipated events, visit BIC’s official website bahraingp.com or call the BIC Hotline on +973- 17-450000.