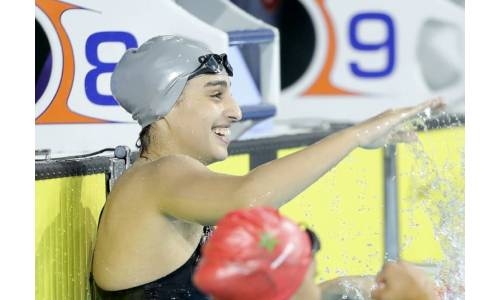 Bahrain won four more medals yesterday to bring their total haul to 13 after the morning session on the penultimate day of the Arab Swimming Championships 25M, being held in Abu Dhabi. The Kingdom’s national team captured two gold medals on day three of the four-day competition. They were highlighted by two gold medals won by Noor Yusuf Taha and Saud Salah.

Noor, who was one of Bahrain’s two swimmers at the Tokyo Olympic Games earlier this year, captured her gold in the Women’s 100m Backstroke for ages 16 to 18.

It was her second gold of the competition after earlier clinching first place in the 50m Backstroke, and third medal overall having won the bronze in the 50m Butterfly.

Salah, meanwhile, claimed his gold medal in the Men’s 200m Breaststroke for ages 16 to 18.

His gold added to his three other medals so far.

He also won the silver medal in the Men’s 100m Breaststroke, the silver as part of the 4x50m Individual Medley Relay team, and the bronze with Bahrain’s 4x200m Freestyle Relay team.