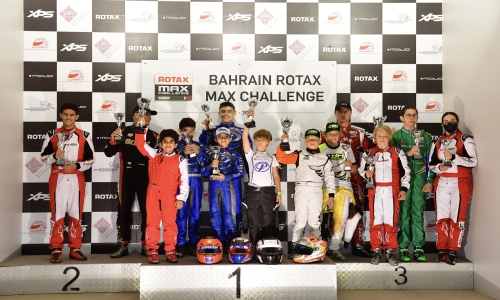 The first-ever champions in the Sakhir Rotax MAX Challenge (SRMC) were crowned over the weekend following the final two rounds of the series’ inaugural season held at Bahrain International Karting Circuit (BIKC) in Sakhir.

The SRMC is BIKC’s all-new, highly competitive national karting championship, which has added to the action in the long-established Bahrain Rotax MAX Challenge, which is scheduled to take place later this season.

The last two events—rounds three and four—were held along BIKC’s 1.414-kilometre CIK-FIA track and the competitors were suited up in their very own Rotax karts. Fahad Almuqla claimed the champion’s trophy in the Senior MAX category after finishing the inaugural four-round campaign with 126 points. He claimed two Finals wins and appeared on the podium the two other times.

Almuqla’s points haul in the season-finale was crucial to his title bid, as he finished the season just 10 points ahead of runner-up Lewis Smith who had 116 points, which included the victory in the Final race of the campaign. It was the tightest championship battle on the SRMC standings.

Shaikha Haya bint Saqer Al Khalifa was third with 89 points. In the Junior MAX category, Luca Houghton was the runaway title winner, ending the SRMC season with 136 points including a clean sweep of the Finals in all four rounds.

In second was Alexander Skjelten with 97 points, while Gracie Rose Grantham came third on 86 points. Shaikh Rashid bin Salman Al Khalifa was the champion in the Mini MAX category, winning one Final and stepping onto the podium the three other times en route to scoring 119 points for first place.

A close second with 103 points was Charlie Goddard, while just a single point behind in third was Khaled Alnajjar. Shaikh Ahmed bin Saqer Al Khalifa won the Micro MAX class with 115 points.

He took first place in the Finals of three of the rounds. Alexander Christov came second on 97 points, while Yousif Bader was third on 56 points.

Shaikh Ahmed took first place in the Micro MAX Final while Henrijs Grube clinched the top spot in the DD2 MAX category. In the SRMC’s fourth and last meeting, Smith claimed the Senior MAX Final win while Houghton did the same in the Junior MAX.

Ainis and Shaikh Ahmed repeated their successes by taking the Mini and Micro MAX Finals, respectively, while Almuammari won the DD2 MAX Final.