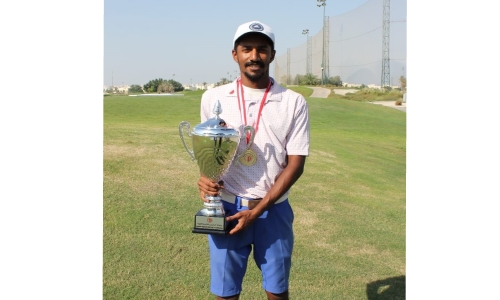 The Bahrain national team golfer carded a one-over-par 73 in the final round to bring his three-day total to two-under-par 214.

His day three performance yesterday included six birdies, including one on the 18th hole, but he also had a pair of double bogeys on holes five and 14 and three other bogeys.

Al Merisi capped a memorable weekend at RGC’s Montgomerie championship course as he led the tournament from the first to last day.

After a disappointing second round, the Danish-French national bounced back with the field’s best score on day three of two-under-par 70. He had just two bogeys on the day while playing four birdies.

Sorensen completed the event with a five-over-par score of 221 over 54 holes.

He finished yesterday’s play with an even-par score of 70 to bring his three-day total to 222.

A further three shots behind was Sultan Al Hakam who played a 75 yesterday, while finishing tied-fifth were Fahad Al Hakam and Mohammed Al Noaimi, both with 226 total scores.

Abdulla Al Yaqoob was ninth on 232, with Hamad Afnan and Julian Jacobs tied-10th on 236 totals.

Fifty-four of the 60 players who made the cut for the final round completed the competition.

At the end of play, the winners were presented their respective prizes in an awarding ceremony attended by officials from tournament organisers the Bahrain Golf Association.

Al Merisi became the third different player to win the competition in each of its three years.

This year’s Open marked the first time it was held as a World Amateur Golf Rankings (WAGR) event.

Competitors have been able to improve their standing or become ranked players in the WAGR.