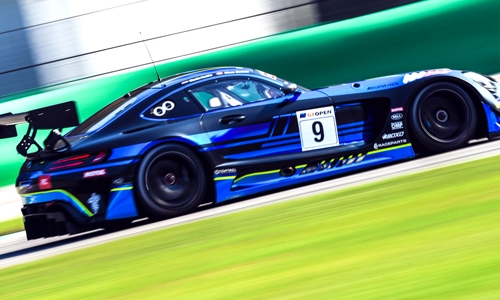 Bahraini-British racing outfit 2 Seas Motorsport will be back in action later this month for the season finale of the International GT Open, to be held at Circuit de Barcelona-Catalunya.

This was confirmed yesterday by the team. 2 Seas are fresh from winning one of two races in the previous round of the championship, held last month in Monza, and will be looking for even greater success in this upcoming meeting, taking place October 22 to 24.

Their Monza participation marked the European debut for the team. Suiting up once again and sharing the duties in their Mercedes AMG-GT3 car will be Ethan Simioni and Martin Kodric.

The pair raced together for the first time for 2 Seas in the last round, and are looking forward to getting out on track once again with more knowledge and experience in their new challenger. 2 Seas Motorsport driver and team co-owner His Highness Shaikh Isa bin Abdulla Al Khalifa commented: “The GT Open championship was great to be a part of over the Monza weekend, and it is great to confirm we are back racing with them for the season finale in Barcelona.

“We enjoyed a strong weekend last time out, Ethan and Martin formed a very strong partnership, and the team continues to get stronger with each activity.

“We have been testing extensively lately, and I am really pleased to see the hard work and dedication paying off with the biggest challenge last time out.” Simioni added: “It is great to be able to confirm a second race with 2 Seas Motorsport and a return to the track to take on the final round of the championship in Barcelona.

“The team did a great job at every stage, and I immediately felt like part of the family. I learnt a huge amount from the whole team and running with Martin, and I’m really pleased to be back for the weekend, and hopefully we can push for another strong result.”

The team were able to complete a comprehensive run programme during testing late last month at Snetterton Circuit in the UK. The 2021 season has proven to be successful for 2 Seas Motorsport so far.

Aside from their Monza success, the team have achieved pole positions and race victories at both the Gulf 12 Hours Bahrain and the one-off Intelligent Money British GT entry at Silverstone.