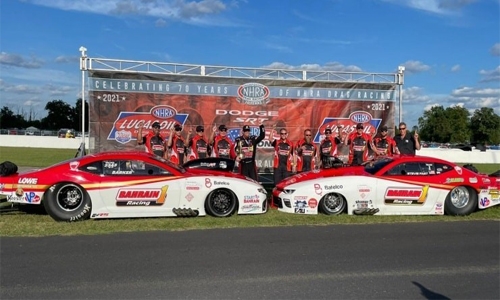 It was Barker’s first career victory in the E3 Spark Plugs NHRA Pro Mod Drag Racing Series presented by J&A Service, and it came against Jackson, the category’s back-to-back world champion. Barker and Jackson met in a thrilling head-to-head in the event’s final round. In that race, Jackson left the start line first but Barker tracked him down in his nitrous-powered Bahrain 1 Racing/ Lowe Toyota Camry, going 5.742-seconds at 251.67 mph to narrowly beat Jackson’s 5.785 at 248.29. “This is absolutely perfect,” Barker was quoted as saying.

Earlier in the meeting, Barker defeated Doug Winters, Brandon Snider, and top qualifier Rickie Smith to reach the final. Jackson, who had won at the US Nationals in two of the previous three years, reached the final round for the fourth time this season and the 21st time in his career.

He had earlier knocked off JR Gray, Jim Whiteley, and Jerico Balduf. Bahrain1’s other drivers Al Balooshi and Justin Bond did not qualify for the final round of the meeting.

On the season standings, Jackson moved to second place, 66 points behind class leader Jose Gonzalez. Only four races remain in the season, with Bahrain1’s Pro Mod racers’ next outing scheduled between September 17 and 19 as part of the DeWalt NHRA Carolina Nationals at zMAX Dragway in Charlotte.