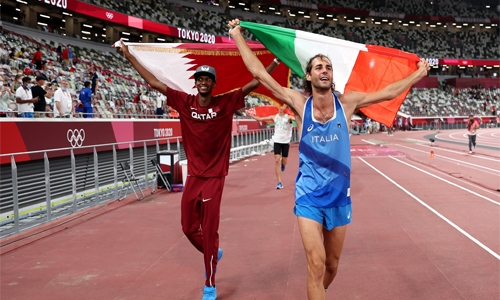 Elation erupted on the track on Sunday night in Tokyo as Qatar's Mutaz Essa Barshim and Italy's Gianmarco Tamberi decided to share the Olympic gold medal.

Barshim and Tamberi did not miss any jumps and cleared 2.37 meters. They both did not get over the 2.39-meter mark after three respective attempts. The official asked them whether they wanted to go forward with a jump-off to decide who would win but Barshim asked whether they could share the gold. Once the official nodded, Tamberi leapt into Barshim's arms to celebrate.

"It is amazing, man," Barshim said. "To share it with Marco is an amazing feeling. It is a great feeling. I’m really happy."

Belarus's Maksim Nedasekau cleared 2.37 meters but finished the day with more failed attempts and will leave Tokyo with the bronze medal.

"It is unreal," Barshim said. "It is crazy I am so happy, man. It was the only thing missing. Now I am complete, I am so happy."

In 2012, Barshim was part of a three-way tie and shared the Olympic bronze medal with Derek Drouin from Canada and Robert Grabarz from Great Britain. It was later upgraded to silver after Russia's Ivan Ukhov, who won gold was disqualified for an anti-doping violation. In 2016, Barshim finished second for silver. Within the last Olympic cycle, he has topped the 2017 and 2019 world championships.

Barshim has cemented his place among the all-time high jump greats and his personal best of 2.43 meters puts him at No. 2 on the all-time list behind the world record of 2.45 set by Javier Sotomayor in 1993.

Tamberi collapsed to the ground in celebration just feet away from a cast that he kept from a leg injury in 2016 that prevented him from competing at the 2016 Olympics. The casing read "Road to Tokyo 2020" before 2020 was crossed off for 2021.

"I was told in 2016 just before Rio there was a risk I wouldn't be able to compete anymore," Tamberi said. "It's been a long journey."

To add to Tamberi's happiness, his compatriot Lamont Marcell Jacobs became the first Italian man to win the men's 100 meters in history just 10 minutes later. Tamberi was waiting for him just feet away from the finish line to continue the celebration.