Bahrain around Tokyo Olympics | THE DAILY TRIBUNE | KINGDOM OF BAHRAIN 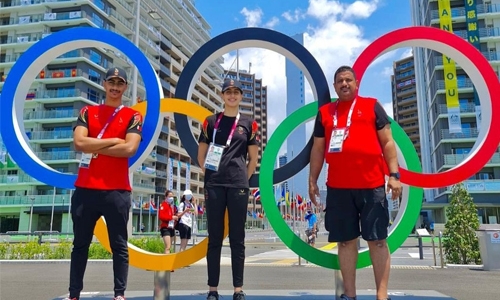 Bahraini swimmers Abdulla Isa and Noor Yusuf Taha are continuing to train ahead of their participation at the Tokyo Olympic Games. Supervised by their coach Dhaen Yusuf Alamer, Abdulla and Noor have been training daily in the pool at the Japanese capital. Abdulla and Noor are set to get into the water at Tokyo’s Olympic Aquatics Centre on Thursday and Friday, respectively.

Eighteen-year-old Abdulla will be swimming in the Men’s 100m Butterfly, in which he is the national record holder of 58.44 seconds. Noor, meanwhile, will compete in the Women’s 50m Freestyle, where she owns a personal best time of 29.42s. This year’s Games will mark the sixth straight Olympics where Bahraini swimmers are competing, and seventh overall.