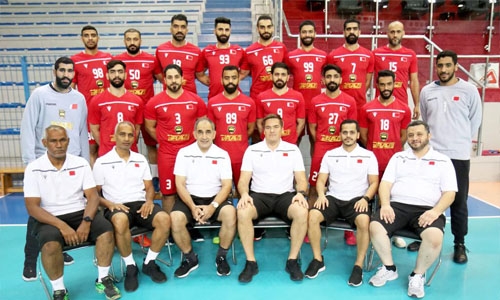 Bahrain’s senior men’s national handball team depart this evening for Japan to participate in the Tokyo Olympic Games, which gets underway in just over a week’s time. The Bahrainis are set to make their historic debut appearance in the men’s handball tournament at the Olympics.

They are the first athletes from the Kingdom to have qualified for a team sport at any Olympic Games. The nationals have been training daily under head coach Aron Kristjansson for the event at the Bahrain Handball Association arena in Um Al Hassam. Kristjansson has named a 16-player squad that will be travelling to Tokyo.

“The Olympic Games are the biggest sporting event in the world and something that athletes and coaches work hard on to not only participate in, but to win medals in too,” Kristjansson was quoted as saying. He qualified for the 2004 Olympics as a player on the Iceland national team but missed out on participating due to injury. “I didn’t have the opportunity to go to Athens 2004, but I qualified for the Olympics again as a coach. I always want to win. You just want to do your best job every time and try to use every possibility to achieve the best result. “The Olympic spirit is very special.”

Following their arrival at the Japanese capital, the Bahrainis will play a tune-up game against Argentina on Monday as part of the final lead-up to the start of competition. Bahrain are in Group B of the Olympics’ first phase in men’s handball.

They open their campaign against Sweden on July 24 before taking on Portugal on July 26. They then face reigning World and Olympic champions Denmark two days later.

The Bahrainis square off with fellow-Asian side Japan on July 30, before completing the preliminaries against Egypt on August 1. Group A consists of Norway, France, Germany, Brazil, Spain and Argentina. The top four from each pool move on to the knockout quarter-finals.

The Bahrainis booked their berth at the Tokyo Olympics after winning the Men’s Asian Qualification Tournament held in Doha in October of 2019, defeating South Korea 34-29 in the final.

Bahrain are taking part in five sports at the Tokyo Olympics. Aside from handball, the others are athletics, swimming, shooting and boxing. More than 200 nations will be represented at the Japanese capital, with athletes vying for medals in over 300 events across more than 30 sports.