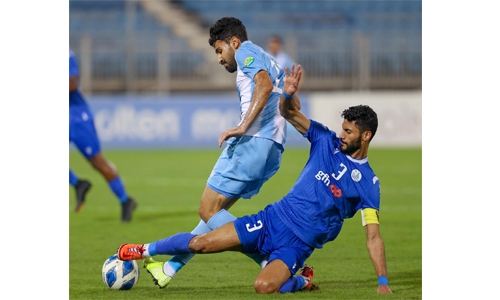 Substitutes Hashim Sayed Isa and Adnan Fawaz Alshirah were both on target for the victors in the last quarter-hour.

The result earned Riffa a seven-point lead atop the league table from their closest challengers with just two games to play—sealing the season-long championship battle. Riffa claimed their 13th title in the history of the Kingdom’s top football league.

They had previously won in the 2018/2019 campaign before Hidd claimed the title last year.

Isa scored the first goal for Riffa last night against Hidd, who finished the game with 10 men after Moses Atede Jona was shown a red card in the 81st minute. Isa fired in in the 76th minute following a brilliant through pass from teammate Jassim Al Shaikh.

The pair were operating on the left flank, and Al Shaikh made a fine assist that Isa sent into the net with a low, left-footed shot. Alshirah then added Riffa’s second goal in the first minute of stoppage time.

He was on the receiving end of a low cross from the left-wing, and he made no mistake with his one-touch effort in front of the goal, which he sent to the top-right corner of the goal.

The result was the 13th win for Riffa in 16 matches as they improved to 41 points. East Riffa is their closest challengers with 34, while Manama is third on 30.

Hidd dropped their seventh match and stayed on 21 points in the middle of the table. In yesterday’s other match, Muharraq defeated Al Ahli 3-1. Muharraq claimed only their sixth win in 16 games as they improved to 23 points, while Ahli suffered their seventh loss as they stayed on 17 points.