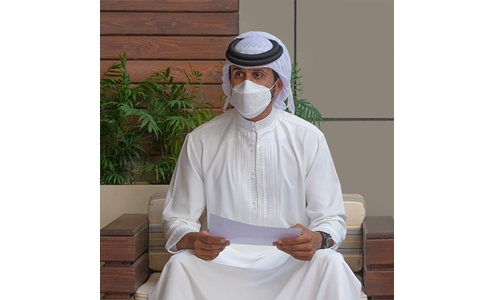 His Highness Shaikh Nasser bin Hamad Al Khalifa, the Representative of HM the King for Humanitarian Work and Youth Affairs and Chairman of the Supreme Council for Youth and Sports, said that the Bahraini sports have made great achievements globally thanks to the great and unlimited interest of His Majesty King Hamad bin Isa Al Khalifa.

HM the King has laid the foundations of Bahraini sports and supported the Kingdom's champions and accomplishers for further feats that confirm that sports activities in the Kingdom have become more developed technically and administratively, HH Shaikh Nasser said during a meeting, attended by HH Shaikh Khalid bin Hamad Al Khalifa, with the editors- in-chief of local dailies.

The Bahraini sports owe their development to HM the King, the first sportsman in the Kingdom, who dedicated thoughts and time to them and accorded great attention and encouragement to all athletes, he said.

This has contributed to the introduction of many administrative, technical and legislative developments relating to sports, which empowered the sports movement in the Kingdom to advance to international levels and to make Bahrain a successful sports and youth destination.

The situation will become even better with the recent royal decree allowing professionalism in sports that will allow Bahraini sports to move from amateurism to professionalism.

The sports sector is also receiving great attention from His Royal Highness Prince Salman bin Hamad Al Khalifa, the Crown Prince and Prime Minister, which was evident through the government's adoption of numerous initiatives to boost sports, including the Sports Professionalism Law, HH Shaikh Nasser said.

The boost has given sports and athletes a strong impetus to develop the Bahraini experience, which has achieved a unique status in the region through legislation, regulations and initiatives adopted by the government, he added.

HH Shaikh Khalid has been particularly keen on promoting the laws and legislative, technical and administrative aspects that boost youth and sports activities in the Kingdom, HH Shaikh Nasser added.

HH Shaikh Khalid's intensive meetings with ministers and officials have contributed to the completion of all the foundations of "Estijabah" in two years instead of the four years planned to implement the program.

HH Shaikh Faisal bin Rashid Al Khalifa, "Estijabah" Vice-Chairman has made great and laudable efforts and was able, thanks to his experience, expertise and follow-up, to accomplish many achievements in the program and to implement outstanding initiatives that have had great effects on the success and development of sports in the Kingdom, HH Shaikh Nasser added.

Estijabah … the launch and the objectives

Recalling the launch of the "Estijabah" program, HH Shaikh Nasser said, “From the beginning, we have set important principles to take Bahraini sports to an advanced level swiftly and purposefully. The basic principles were defined as a fair and open competitive environment, highlighting achievement and shortcomings, cancelling guardianship, avoiding duplication, and institutional rather than individual work, in addition to aiming for gold only. Based on such premises, we started chartering a better future for Bahraini sports with robust foundations."

"We have put in place a 208-week plan, the operational plan that includes a set of initiatives that will change the course of Bahraini sports in technical, administrative and organizational terms, provided that they are implemented in 208 weeks and in record time."

HH Shaikh Nasser said that during the launch of "Estijabah" in April 2018, the emphasis was that all the initiatives that would emerge from the program would pave the way for a new progress for sports in Bahrain and would place sports activities among the priorities of the next stage of the Bahrain's forward-looking movement.

Today, we are witnessing the realization of many initiatives and programs that have enabled Bahraini sports to move from amateurism to professionalism and to sports entertainment industry, he added.

HH Shaikh Nasser stressed that "Estijabah" has made great achievements and that its effects are clear in the sports sector. They include closing the issue of the athletes' dues, which was an essential part of the payment of dues and achieving justice for all athletes.  The law establishing national clubs as commercial companies has transformed Bahraini sports into an industry and the Sports Professionalism Law takes Bahraini sports from amateurism to professionalism, which means stability for athletes and players. The redefinition of roles in sports institutions has made their tasks, responsibilities and missions clear, which has helped move away from any potential conflict or duplication of activities.

HH Shaikh Nasser added that Bahrain is on the right track to develop the concept and practice of sports and to enhance the legislation that organizes sports activities and establishes stability for athletes, including the Sports Professionalism Law, in addition to many laws and legislations that will represent a significant quantum leap in the sports development process.

HH Shaikh Nasser commended the great role of the Ministry of Youth and Sports in achieving organized institutional work and enhancing the focus on developing the administrative, technical and organizational dimensions of the various sports sectors.

The ministry has also been keen to achieve the advancement of the various projects it has worked on, which has contributed to Bahraini sports making outstanding qualitative leaps, he added.

Bahrain, with its future vision, is going ahead with establishing a base for sports activities, far from conflicts or duplications in the administrative and technical work and away from the bureaucracy that have caused an obstacle to sports development, he said.

Defining the roles of sports institutions

HH Shaikh Nasser said changes would be introduced to rearrange the organization of sports in the Kingdom by defining the terms of reference.

Under the changes, the Supreme Council for Youth and Sports will be in charge of setting strategies and policies, and following up on sports and youth matters. The Ministry of Youth and Sports will be managing and following up sports facilities, licensing federations and clubs, and distributing subsidies in an institutional and achievement-based manner. The Bahrain Olympic Committee will select and follow up only national teams, select coaches for international teams and competitions, and represent the Kingdom abroad.

The role of sports federations will be to enhance the principle of an open competitive environment by expanding the base of fans and participants in local competitions and managing championships and competitions. The clubs will be highlighting and nurturing sports talents, taking part in regional and continental competitions and reaching podiums, he said.

Ahead of the changes, many outstanding issues and challenges have been addressed. They include removing arbitrary conditions for the transfer of players between clubs, closing the players' dues issue, starting the transition to the sports industry by permitting the establishment of clubs as companies, organizing administrative work within clubs, and enacting activity legislation and laws, making Bahrain an example to be emulated in the region.

HH Shaikh Nasser commended the great role of the boards of clubs and sports federations who have worked with diligence, sincerity and dedication for the optimal use of their resources, including financial resources in the correct manner and without any excesses.

This confirms the professional and organized work in the boards of directors of those clubs and their keenness to implement laws and regulations in the club activities, he added.

“We highly appreciate the print, audio-visual and social media that contribute to supporting the sports sector and the initiatives. They also highlight the great achievements made by Bahraini sports. We also commend the interest of local newspapers and sports sections in highlighting the bright image of Bahraini sports and the most important development steps in the sports sector," he said.

HH Shaikh Nasser said that Bahrain is looking with great optimism at the future of sports thanks to the great interest of HM the King and the follow-up and interest of HRH the Crown Prince and Prime Minister.

He expressed confidence in the capabilities of HH Shaikh Khalid in assuming the leadership of the Bahraini sports movement that have had a great impact on the advancement of Bahraini sport.

More steps that will have positive effects on the sports sector, fulfill the aspirations of the sector in the Kingdom and bolster its advancement that will be announced, HH Shaikh Nasser said.