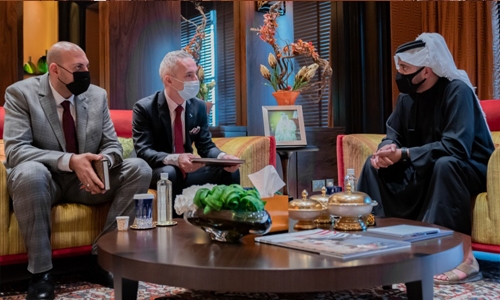 HH Shaikh Khalid bin Hamad Al Khalifa, the Supreme Council for Youth and Sports (SCYS) First Deputy Chairman and Bahrain Olympic Committee (BOC) President has received HE Mr Witold Nowak, the Deputy Mayor of Konin, Poland, who is on an official visit to the Kingdom of Bahrain.

During the meeting, HH Shaikh Khalid praised growing relations between Bahrain and Poland.

"We look forward to bolstering the bonds among both countries through mutual collaboration in the area of sports in order to develop and promote this vital field in both states," HH Shaikh Khalid said.

From his side, Mr Nowak explained: "Poland is keen to strengthen joint cooperation and relations with the Kingdom of Bahrain in various fields, especially in the sports field, which serves to expand the horizons of joint collaboration. We appreciate the great efforts made by HH Shaikh Khalid bin Hamad Al Khalifa in supporting the youth and sports sector in the Kingdom of Bahrain. Thanks to HH Shaikh Khalid, this field has witnessed tremendous development and advancement in line with the directives of the Bahraini leadership to promote this sector,"

US, Iran to hold nuclear deal talks in Vienna without facing each other