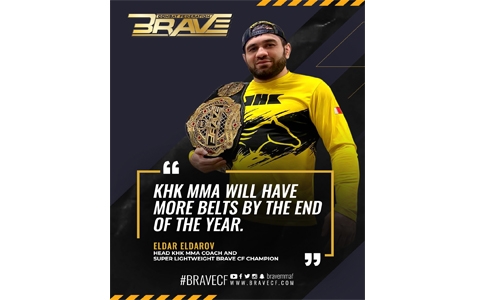 Following the current COVID-19 regulations in the country, Bahrain’s KHK MMA team held a small socially-distanced welcome back surprise for Eldarov outside of the Bahraini Fighters Gym to commemorate his triumphant return to the kingdom and celebrate his #AndStill moment.

Eldarov took the opportunity to give a motivational speech to his students and inspire them to continue advancing within the correct direction in their training and preparation.

Eldarov also shared that this is only the beginning for KHK MMA and 2021 will be a year for hunting for belts and world titles.

The Pride of Bahrain Hamza Kooheji expressed the importance of Eldarov’s victory to Bahrain and the KHK MMA team.

“Eldar’s accomplishment is a pride for us as Bahrainis and as the KHK team. This gives us motivation as a team to secure more accomplishment.
When a team sees their coach accomplish great things, it makes them want to do the same.

It’s different than having a coach who only talks and never does.

He’s a leader by action.

Now that he has defended the BRAVE belt, the next step will be for us to start collecting all BRAVE CF belts one at a time.”

Several other KHK MMA fighters also expressed how they feel about Eldarov’s accomplishment and the importance of watching him defend and bring back the belt to Bahrain.

Most notably, the 20-year-old rising KHK MMA fighter, Muhammad Mokaev. “We are all proud of Eldar, that he came back with the belt and was able to defend his belt.

I believe we will have more KHK champions in BRAVE CF and I believe many guys will be able to defend it.

This is for BRAVE and our team is our motivation to get the belts, defend the belts, and bring them to Bahrain.”