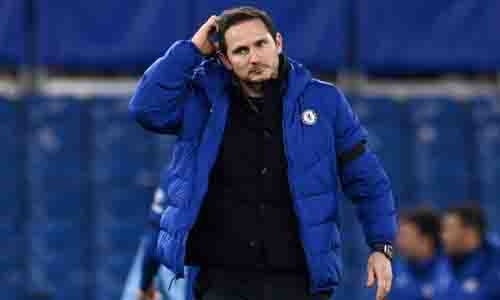 Frank Lampard's reign as Chelsea manager came to an end on Monday as he was sacked after 18 months in the role, said DPA.

The 42-year-old steered Chelsea to a Champions League place in his first season in charge but with the club sitting ninth in the Premier League owner Roman Abramovich decided to act.

"This has been a very difficult decision, and not one that the owner and the Board have taken lightly," Chelsea said in a statement on their website.

"We are grateful to Frank for what he has achieved in his time as Head Coach of the Club.

"However, recent results and performances have not met the club's expectations, leaving the club mid-table without any clear path to sustained improvement."

Abramovich said it had been "a very difficult decision" because of his "excellent personal relationship with Frank" and that he has "the utmost respect for him".

"He is a man of great integrity and has the highest of work ethics. However, under current circumstances, we believe it is best to change managers.

"On behalf of everyone at the Club, the Board and personally, I would like to thank Frank for his work as Head Coach and wish him every success in the future.

"He is an important icon of this great club and his status here remains undiminished. He will always be warmly welcomed back at Stamford Bridge.

"People talk about projects and ideas," Guardiola told reporters. "They don't exist. You have to win or you will be replaced.

"I am not judging Chelsea's decision. I respect their decision. But our world is to win as much as possible. The sporting directors and CEOs want things quickly but every manager needs time to do what they believe.

"That happens in a few places around the world. In one month you can drop everything you build because other teams have good players too. Then you are at risk. I hope to see Frank soon and go to a restaurant with him when the lockdown is finished."

A star for the club in his playing days, Lampard took over as Chelsea manager in the summer of 2019, Abramovich pinning his faith in one of the country's up and coming managers.

Despite a one-window ban on transfers due to breaching rules on signing young players, Lampard helped Chelsea finish fourth in his first season, securing a Champions League spot.

In December, Chelsea hit the top spot but a poor run has dropped them to ninth.

"There can never be a good time to part ways with a club legend such as Frank, but after lengthy deliberation and consideration it was decided a change is needed now to give the Club time to improve performances and results this season," Chelse said.

Former Dortmund and Paris Saint-Germain coach Thomas Tuchel is the bookmakers' favourite to take the job.

Chelsea said they would be making no further statement until a new head coach is appointed.