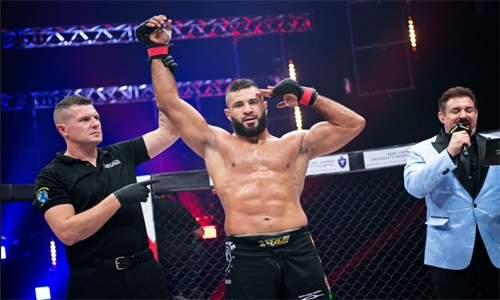 Algeria’s own Mohammed Said Maalem earned his second BRAVE CF victory in devastating fashion, stopping Zvonimir Kralj in the first round of their BRAVE CF 45 fight. Now with two huge wins, the Light Heavyweight feels he deserves a title shot for the vacant world title, as the fastest-growing organization in the world continues to beef up its 205lbs (93 kg) division.

“L’Ambiance” has another landmark win for BRAVE CF, having beaten Todd Stoute by decision. “The Black Hulk” has since bounced back and has called out Mohammed for a rematch, claiming he was injured when they fought, back at BRAVE CF 33. Said Maalem spoke about the Stoute fight and had a different idea when it came for the title fight at Light Heavyweight.

“I defeated Todd with a broken finger, if I didn’t have that injury myself, I would have finished him. I think BRAVE CF could put on a title eliminator between Todd and the Swedish fighter whose name I forgot (Anton Turkalj). And I can go against whoever wins for the vacant title. I’m asking His Highness Shaikh Khaled bin Hamad Al Khalifa (founder of BRAVE CF) that my next fight is for the title. I think I deserve the belt and I’m ready to challenge anybody’’.

Although Said Maalem finished Zvonimir in the first round, the fight didn’t go as smoothly as he wanted, as Kralj was the better fighter in the opening stances, getting off on leg kicks and body attacks before getting caught with an overhand right that was the beginning of the end. Mohammed is aware of his bad start, but happy with the adjustments made.

“The leg kicks affected me, I couldn’t just stand in the cage but I switched styles and started to apply more pressure and then I was able to catch him coming in. I feel very happy, this was a very important win for my career.”

If the stars align as Mohammed Said Maalem wishes, he will have the chance to become the second Algerian fighter to win a BRAVE CF world title after the inaugural Featherweight champion Elias Boudegzdame, who also became the first-ever BRAVE CF world champion at BRAVE CF 4, in March of 2017.