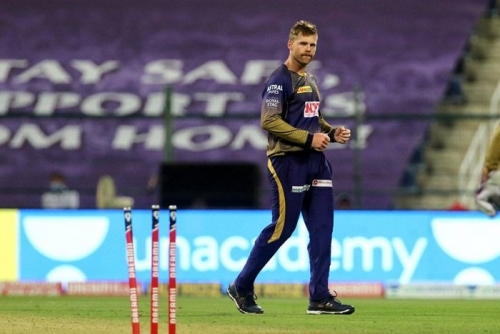 Sensational bowling from New Zealand quick Lockie Ferguson in his first outing this Indian Premier League season helped Kolkata Knight Riders edge out Sunrisers Hyderabad in a super over yesterday. Ferguson returned figures of 3-15 in the Hyderabad innings and then claimed two wickets including Hyderabad skipper David Warner in the one-over eliminator in Abu Dhabi. Warner became the fastest to 5000 IPL runs in 135 innings as he hit an unbeaten 47 but Hyderabad could only equal Kolkata’s score of 163 and the match ended in a tie.

Ferguson then bowled a superb super over to send Warner back on the first ball and took another wicket to keep down Hyderabad to two, a score Eoin Morgan’s Kolkata surpassed in four balls. “For Lockie to come in and perform in both phases was outstanding,” Morgan said. “We’ve been sort of striving to get wins out of the last couple of games, it didn’t happen against Mumbai (Indians); today we were competitive.” Ferguson praised Morgan for staying calm and guiding the team, which is paced fourth in the eight-team table, to a crucial win as the Twenty20 tournament moves towards the business end.

“It’s great having Morgs (Morgan) at the top off the mark with his calmness and of course I had my plan which was working throughout the game,” said Ferguson. “Look we’ll take this win and enjoy tonight, it was a very good win on a tough wicket.” In another match, Kings XI Punjab registered an enthralling win over Mumbai Indians as their clash witnessed two Super Overs.

Both teams scored 176 runs in the allotted 20 overs which took the match into the Super Over. Punjab scored five runs off the Super Over, bowled by Jasprit Bumrah. However, Mohammed Shami too bowled brilliantly as he managed to restrict Mumbai Indians to five runs as well. During the second Super Over, Mumbai Indians batted first and scored 11 runs. From Punjab, Chris Gayle and Mayank Agarwal came out to bat and easily took the side over the line on the fourth delivery.

Olympic rings back in Tokyo Bay; a sign of hope in pandemic