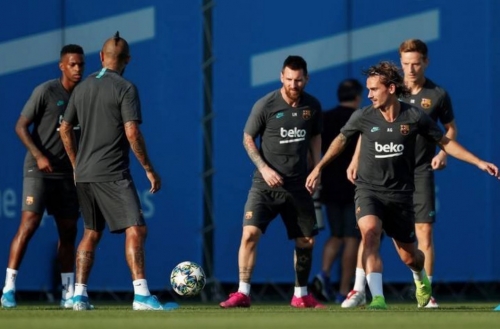 After a harrowing week in which his reputation was dragged through the mud, Barcelona coach Quique Setien came out fighting by overseeing a spectacular 4-1 win away to Villarreal which showed the 61-year-old’s coaching abilities are still intact.

The superb display might not be enough to prevent Real Madrid from winning the title as they hold a four-point lead over Barca with four games left, but it was enough to get a vote of confidence from the club’s president Josep Maria Bartomeu. “Today we saw a dynamic Barca who created a lot of chances and they looked like real title contenders,” he told Spanish network Movistar.

“We’re going to fight until the end in this league campaign and in the Champions League.” Setien was not the club’s first choice to succeed Ernesto Valverde in January and his position has been questioned as the team’s title bid unravelled with draws against Sevilla, Celta Vigo and Atletico Madrid.

His lack of experience in dealing with a dressing room such as Barca’s, full of world class players but high maintenance egos, also came under the microscope after he brought Antoine Griezmann on in added time against Atletico.

But his ability to get a team playing truly attractive and exciting football was finally evidenced against Villarreal, and led Bartomeu to dismiss reports there had been a rift between the coach and players. “I know there have been rumours going around but they are completely false,” Bartomeu added. “Quique has the full support of the players and the directors and is doing a great job.”

Barca’s free-flowing display was sparked by a tactical shift by Setien, who placed Griezmann alongside Luis Suarez in a front two with Lionel Messi as the playmaker, in contrast to previous matches where Griezmann was deployed out on the left wing. Messi set up goals for Suarez and Griezmann, teeing up the latter’s audacious chip with an irresistible backheel.

“I felt truly satisfied with the performance and I’m sure the players did too because they played a great game and enjoyed themselves,” Setien explained. “I would like to play like this in every game but it’s not an exact science. Every game is different but today we did everything right.”