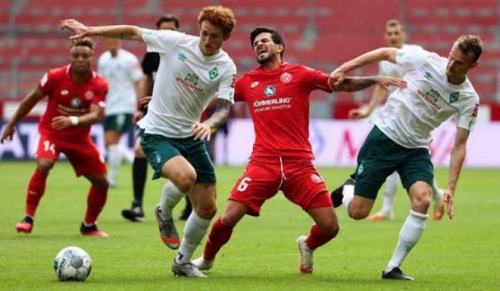 Werder Bremen gave themselves hope of avoiding relegation from the German Bundesliga by thrashing Cologne 6-1 to grab a play-off place on the last day of the season, while champions Bayern Munich routed Wolfsburg before lifting the trophy.

Japan striker Yuya Osako scored twice as Bremen stole the lifeline of the relegation/ promotion play-off place from Fortuna Duesseldorf, who lost 3-0 at Union Berlin and were relegated with Paderborn, finishing one point behind Bremen. Florian Kohfeldt’s Werder will face second-tier opponents in either Heidenheim or possibly neighbours, rivals and fellow fallen giants Hamburg in the play-off first leg on Thursday.

Bremen have spent more seasons than any other team in the Bundesliga, having only spent one term in the second tier, in 1980-81. A burst of goals from Osako, Milot Rashica and Niclas Fuellkrug -- all in the space of eight minutes -- had Werder 3-0 up at the break against Cologne at the Weserstadion.

Former Everton midfielder Davy Klaassen then fired home a rebound just after the break before Osako, facing his old side, added his second and USA international Josh Sargent completed the rout. Dominick Drexler pulled a goal back for Cologne.

Werder, the four-time Bundesliga champions, also needed a favour from Berlin and got one as Union beat Fortuna 3-0 with goals from Nigerian duo Anthony Ujah and Suleiman Abdullahi either side of veteran midfielder Christian Gentner’s effort. Bremen will find out their play-off opponents on Sunday, with Heidenheim currently in the play-off place ahead of the final round of matches in the second division.

Hundred up for Bayern At Wolfsburg, Bayern striker Robert Lewandowski scored a penalty for his 34th league goal of the season, finishing as the top scorer for the fifth time. Kingsley Coman, Michael Cuisance and Thomas Mueller also got on the scoresheet as Bayern, champions for the eighth straight season, finished 13 points clear of second-placed Borussia Dortmund.

Mueller set up Coman for Bayern’s opening goal to finish the campaign with a league record 21 assists, and his goal that rounded out the win was also Bayern’s 100th league goal this season -- one short of the Bundesliga record. Wolfsburg captain Josuha Guilavogui was sent off for a second yellow card after fouling Cuisance, leading to Lewandowski’s penalty.

Gladbach into Champions League Meanwhile, Borussia Moenchengladbach and RB Leipzig secured qualification for next season’s Champions League after 2-1 wins over Hertha Berlin and Augsburg respectively, as fifth-placed Bayer Leverkusen missed out by two points despite beating Mainz 1-0. Dortmund, who had already wrapped up second place, crashed to a 4-0 home defeat by Hoffenheim, for whom Croatia striker Andrej Kramaric scored all four goals, including one penalty.

That result allowed Hoffenheim to leapfrog Wolfsburg and take sixth place, although both sides will go into the Europa League next season along with Leverkusen. Before kick-off in Dortmund, Mario Goetze, whose winning goal sealed Germany’s victory in the 2014 World Cup final, was given a send-off by the club.

He will leave this summer with his contract having expired, but the 28-year-old attacking midfielder has not announced his future club. Elsewhere, Timo Werner signed off with a brace in RB Leipzig’s 2-1 win at Augsburg in what was his final appearance for the club before moving to Chelsea.

Schalke’s disastrous second half of the season was completed with a 4-0 thrashing at the hands of Freiburg as they finished the season 12th, having been third in December. Eintracht Frankfurt beat bottom side Paderborn 3-2 in yesterday’s other game.